This page is an older summary version of the pages linked at the UNC algorithms page and the SPHARM PDM framework page.

Shape analysis has become of increasing relevance to the neuroimaging community due to its potential to precisely locate morphological changes between healthy and pathological structures. This project focuses on developing novel methodology and a comprehensive set of tools for the computation of 3D structural statistical shape analysis. There are several open problems in this area, ranging from multi-object analysis, enhanced shape correspondence to statistical analysis of shape with clinical covariates. We at UNC have developed and implemented an ITK-based framework for local shape analysis. Several projects handle specific visualizations, correspondence establishing methodology and sophisticated statistics. All of these projects have a generic component that make relevant in other applications (e.g. the statistical methods can be applied to other settings in need of multiple comparison correction, such as when many volumetric measurements are analyzed jointly).

The UNC shape analysis is based on an analysis framework of objects with spherical topology, described by sampled spherical harmonics SPHARM-PDM. In summary, the input of the proposed shape analysis is a set of binary segmentation of a single brain structure, such as the hippocampus or caudate. These segmentations are first processed to fill any interior holes and a minimal smoothing operation. The processed binary segmentations are converted to surface meshes, and a spherical parametrization is computed for the surface meshes using a area-preserving, distortion minimizing spherical mapping. The SPHARM description is computed from the mesh and its spherical parametrization. Using the first order ellipsoid from the spherical harmonic coefficients, the spherical parametrizations are aligned to establish correspondence across all surfaces. The SPHARM description is then sampled into a triangulated surfaces (SPHARM-PDM) via icosahedron subdivision of the spherical parametrization. These SPHARM-PDM surfaces are all spatially aligned using rigid Procrustes alignment. Group differences between groups of surfaces are computed using the standard robust Hotelling T 2 two sample metric (see below). Statistical p-values, both raw and corrected for multiple comparisons, result in significance maps. Additional visualization of the group tests are provided via mean difference magnitude and vector maps, as well as maps of the group covariance information.

The implementation has reached a stable framework and has been disseminated to several collaborating labs within NAMIC (BWH, GeorgiaTech, Utah). The current development focuses on integrating the current command line tools into the Slicer (v3) via the Slicer execution model. 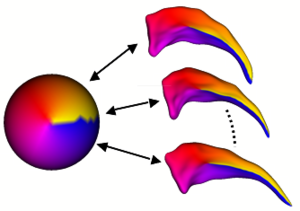 The SPHARM-PDM based correspondence is a global correspondence method that does performs well for many structures. But in our studies it has shown to be inferior to population based correspondence methods, when assessing statistical modeling properties derived from the established correspondence, such as specificity and generalization ability of a statistical model. Current methodology in population based correspondence is based mainly on minimizing distribution properties of surface point locations and are thus not invariant to alignment. We have extended the population based correspondence framework to include curvature based measurements, such as the Koenderink Shape Index S and Curvedness C in combination with the standard location information. The implementation is based on ITK and uses the SPHARM-PDM correspondence as an initialization. We have favorably compared our combined "Curvature + Location" MDL to the standard MDL, as well as to the SPHARM approach. Especially with more complex structures, such as the femural bone and the striatal structure (composed of caudate, nucleus accumbens and putamen), our method outperforms the other methods. It also illustrates the potential of this approach of objects as complex as the human cortex, the object of study in the NAMIC year 07/08. 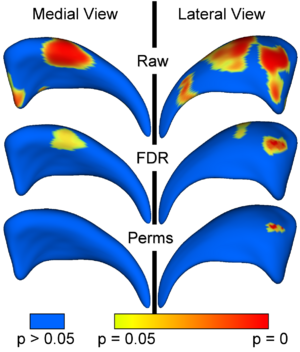 In our statistical framework, group differences between groups of surfaces are computed locally for every surface point using the standard robust Hotelling T^2 two sample metric. Statistical p-values, both raw and corrected for multiple comparisons, result in significance maps. Additional visualization of the group tests are provided via mean difference magnitude and vector maps, as well as maps of the group covariance information.

The local shape analysis involves testing from a few to many thousands of hypothesis (one per surface ele- ment) for statistically significant effects. It is thus important to control for the multiple testing problem, and the most common measure of multiple false positives is the familywise error rate (FWER). The multiple testing problem has been an active area of research in the functional neuroimaging community. One of the widely used methods in the analysis of neuroimaging data makes inferences based on the maximum distribution. In our work, we are employing non-parametric permutation tests to estimate uniformly sensitive extrema distributions. The correction method is based on computing first the local p-values using permutation tests. The minimum of these p-values across the surface is then computed for every permutation. The appropriate corrected p-value at level α can then be obtained by the computing the value at the α-quantile in the histogram of these minimum values. Using the minimum statistic of the p-values, this method correctly controls for the FWER, or the false positives, but no control of the false negatives is provided. The resulting corrected local significance values can thus be regarded as pessimistic estimates akin to a simple Bonferroni correctection.

Current development is extending the framework to include subject variables, such as gender, age and clinical scores into the current pure group difference computation.

A considerable amount of work was spent on the development aspect of our shape analysis tools. The main visualization tool, KWMeshVisu, can be called directly from Slicer 3 for the overlay of scalar, vector and ellipsoid data onto surfaces (so-called attribution) and the application of a set of versatile colormaps. The display of a saved "attributed" surfaces is then again possible within Slicer 3 to close the loop. This lean visualization tool fills a niche and is also used in our cortical thickness analysis tool.

In order to add the UNC shape analysis tools to the current 3D Slicer distribution do the following: