Currently, our project is focused on developing a novel method for diffusion tensor imaging (DTI) tractography modeled on the dynamics of a viscous fluid described by the second order non-linear Navier-Stokes equations. Even though these equations are most commonly seen in the context of fluid mechanics, they have been shown to be successful in modeling a large number of diverse physical phenomena. Our second order nonlinear-based approach is an extension of previous linear PDE methods, but our model contains a viscous force not present in previous methods, represented as an additional convection term in the PDE. We model local viscosity of the fluid as a function of the local intervoxel and intravoxel anisotropy in the corresponding DTI image volume. The incorporation of this convection term in our flow field calculation allows us to closely couple the magnitude of the fluid velocity to the magnitude of the underlying anisotropy of the DTI tensor field, providing a dampening force in background areas, such as gray matter and CSF. This eliminates the need for the white matter mask used by other PDE-based methods to prevent the model from entering these areas. To compute an estimate of the most likely connection path between two regions in the brain, we simulate the flow of an artificial fluid between those two points through a volume whose dimensions, pressure, and local viscosity are derived from the underlying DTI data. We then numerically solve for the fluid velocity vector field. The estimated connection path is then computed by finding the optimal path through the fluid velocity that simultaneously maximizes both the fluid velocity and its gradient.

Computational fluid dynamics is a rich field and, in addition to this tractography method, we are investigating its application to the analysis of diffusion tensor imaging (DTI) datasets for registration and analysis of white matter pathology. We are currently developing several useful and novel diffusion tensor imaging (DTI) analysis algorithms modeled on the principles of fluid mechanics for inclusion within the NA-MIC framework. The goal of this project is to fully develop these methods, make them compatible with the NA-MIC ITK-based software infrastructure (i.e. Slicer), and promote their dissemination to the scientific community. 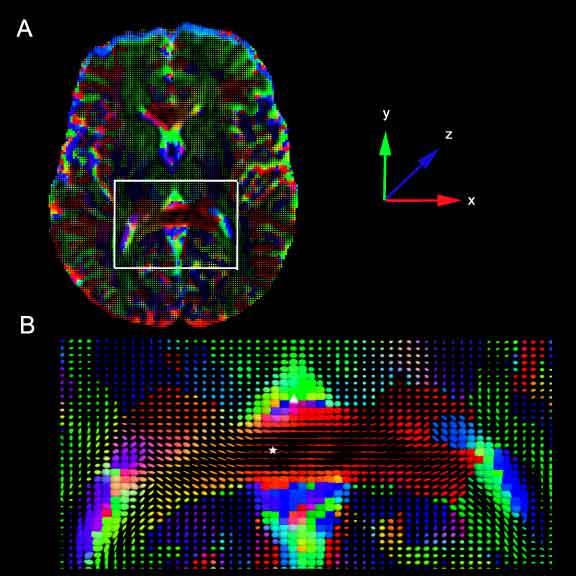