This package contains an algorithm for removing identifiable facial features (eyes, nose, and mouth). This algorithm, which is still under the validation phase, locates the subject's facial features and removes them without disturbing brain tissue. The algorithm was devised to work on T1-weighted structural MRI; it produces a defaced structural image, and an image of the applied mask. The code mri_deface produces a facial mask. The code mri_mask is then used to apply the mask to the original volume, resulting in a defaced structural image. For images in other modalities, the mask can be co-registered to the image before application.
Keywords: HIPAA, data sharing, de-identification 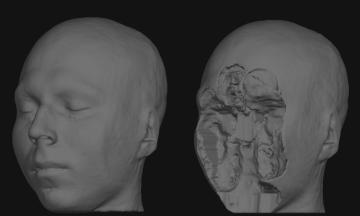 Support is very limited but we will do our best to try to answer your questions. Please email your constructive comments to: Bruce Fischl (fischl@nmr.mgh.harvard.edu)