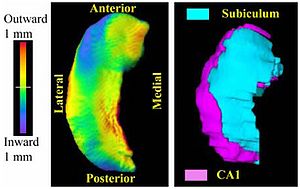 The long term goal of Computational Anatomy (CA) is to create algorithmic tools that aid basic and clinical neuroscientists in the analysis of variability in anatomical structures at different scales. The difficulty is the complexity of anatomical substructures and the large variation across subjects. It is proposed to develop an open-source pipeline for 3D statistical shape analysis of anatomical variations from a population of anatomical structures. The overall aim is to integrate 3D Slicer application and ITK software library with the statistical shape analysis pipeline being disseminated by the Biomedical Informatics Research Network and thus enable the wider neuroimaging community to efficiently analyze anatomical variations in disease. The first aim is to standardize shape deformation vectors generated by several CA methods such as the Large Deformation Diffeomorphic Metric Mapping (LDDMM) developed at the Center for Imaging Science at Johns Hopkins University and the Finite Element Method for Deformable Registration (FEMDR) used in ITK. This will allow shape vectors to be used by both global metric classifier analysis in classifying diseased shapes and Gaussian Random Field (GRF) model analysis in localizing shape changes in disease. The two methods will be unified to provide a new metric classifier based on the data generated by GRF. In the final stage, hypothesis testing will be used to correlate global metric classification with localized shape changes. The second aim is to construct anatomical atlases needed for analysis of shape vectors. These atlases will be generated from segmented hippocampal and amygdala structures in already acquired populations of children, adolescents and young adults in neuroimaging studies of major depression disorder (MDD) at Washington University at St Louis. As a major public health burden, MDD provides the biological testbed for the pipeline from which probabilistic atlases will be generated. The third aim is to integrate the software libraries with the pipeline by leveraging the power and flexibility of the 3D Slicer software and ITK libraries developed by NA-MIC, Kitware and others. The fourth aim is to implement modules for visualization of the analysis of shape vectors in 3D Slicer. The fifth aim is to implement a stand-alone version of Medical Reality Markup Language (MRML) independent of 3D Slicer. This will allow for the propagation of MRML as a standard format for future neuroimaging applications.