Stochastic Tractography is a Bayesian approach to estimating nerve fiber tracts from DWMRI (Diffusion Weighted Magnetic Imaging) images. The Bayesian framework provides a measure of confidence regarding the estimated tracts. This measure of confidence allows the algorithm to generate tracts which pass through regions with uncertain fiber directions, revealing more details about structural connectivity than non-Bayesian tractography algorithms.

Magnetic Resonance Imaging (MRI) is a valuable imaging modality for studying the brain in-vivo. We can use use MRI to differentiate between tissue types, which is valuable for anatomical studies. However, anatomical MRI provides a homogeneous image of white matter making it difficult to characterize white matter fiber tracts which pass through this region. Diffusion Weighted Magnetic Resonance Imaging (DWMRI) provides information about the diffusion of water molecules in the brain. DWMRI images can be used to construct a DTI data set which provides a complete description of water diffusion.

Researchers have hypothesized that white matter abnormalities may underlie some neurological conditions. For instance, the neurological disease schizophrenia by is characterized by its behavioral symptoms, which include auditory hallucinations, disordered thinking and delusion[6]. Studies have suggested that these behavioral symptoms have some connection with the neuroanatomical abnormalities observed in schizophrenia patients. Using DTI, Researchers can noninvasively investigate the relationship between brain white matter abnormalities and schizophrenia by using DTI.

One possible method to perform tractography is to draw tracts which are oriented along the direction of maximal water diffusion of the voxels they pass through[1]. However, this method does not provide information about the uncertainty of the generated tracks due to noise or insufficient spatial resolution. Probabilistic white matter tractography addresses this problem by performing tractography under a probabilistic framework and provides a metric for assessing the uncertainty of generated fiber tracts. Several mathematical formulations of probabilistic tractography have existed for some time with the earliest being Behren's [3].

Here we estimate the distribution of Tract-Average FA and tract lengths (in mm) for tracts which originate from the right internal capsule and progress toward the prefrontal cortex. 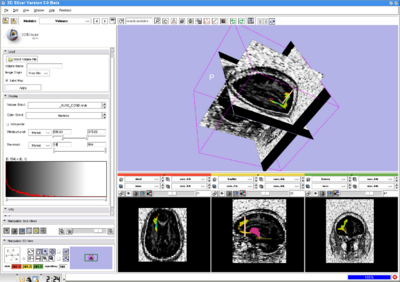 Connectivity Probability Map. Colors indicate the probability that a voxel is connected to the right internal capsule (solid magenta) via a fiber tract which progresses towards the frontal cortex. Yellow indicates lower probability while blue is high probability of connection via these fibers. 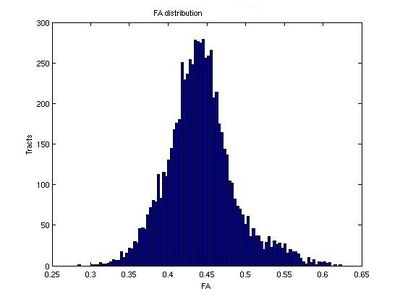 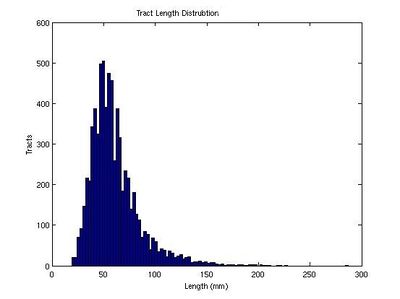 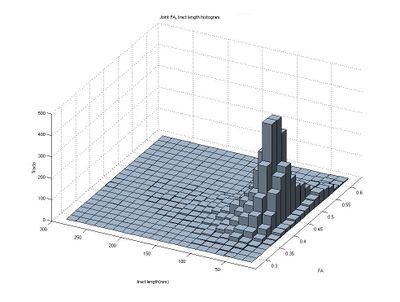 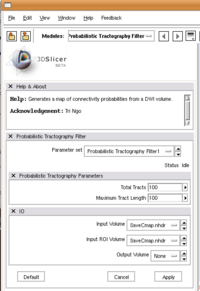 The software developed in this project includes: