In this page we present some results on the conversion from dicom data to DTI. Working with this new dataset, we noticed differences between the dicom header information and the ones from the original protocol designed for this study. In this page, we want describe and discuss these differences.

The data we worked with have been acquired with a Siemens 3T Tim Trio.

The DTI sequence is a 25 directions with variable b-values plus one B0 image. 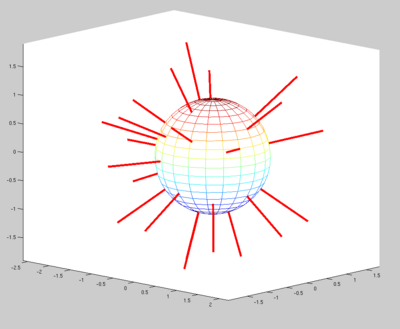 We loaded this dicom dataset into the “Dicom DWI loader” module in Slicer3. This module creates a NRRD header based on the information read from the dicom header. We compared the values outputted by the Slicer3 modules with the ones gave to us by the people who designed the DTI sequence.

The protocol specifies a bvalue maximum of bMax = 1000. Then the bvalue for each directions is bMax times the square of the gradient direction magnitude.

We found out that the bvalues that we read from the dicom header are rounded up to the nearest 50. However people from Siemens told us that the actual bvalues used for the acquisition are the correct ones. The bvalue is modified only when written in the dicom header. It seems that if a user does not have the protocol, it's not possible to find to proper, exact bvalues. 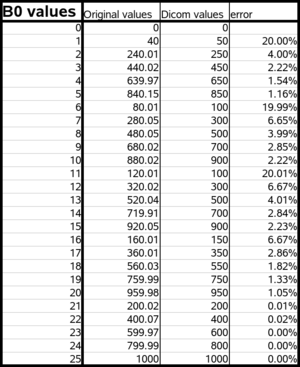 We noticed a major difference in the gradient direction encoding. When displaying the original vectors, they seem to be spread around the sphere. Whereas when we display the gradients of the dataset we worked with, they seem to be only on half of the plan. (in blue on the image) 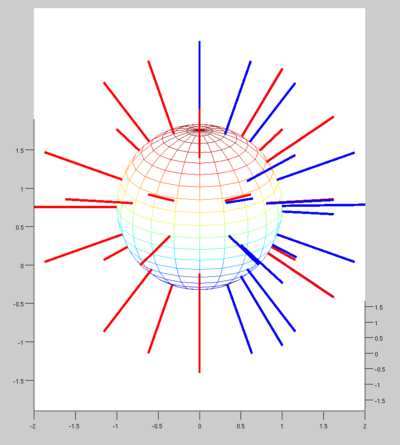 Dicom (blue) and Original (red) vectors displayed on the spehere 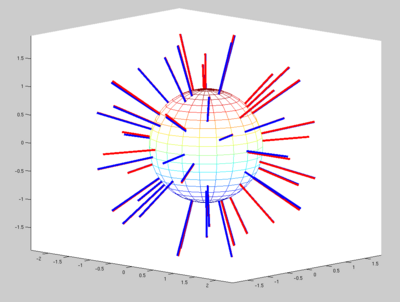 Dicom (blue) and Original (red) lines displayed on the spehere

We know that it's not the vector itself which is important for the tensor computation, but more the line held by the vector. When we display lines instead of vectors, we can see that most of the blue lines have a matching red line. There is no more than 3 degrees difference between the vectors.

But the actual values read from the dicom being different from the original sequence could be an issues for some kind of DTI processing.