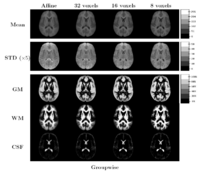 As none of the images are chosen as an anatomical reference, it is necessary to add a geometric constraint to define the reference coordinate frame. Similar to Bhatia et al. \cite{bhatia}, we define the reference frame by constraining the average deformation to be the identity transform: [math] \frac{1}{N}\sum_{n=1}^{N} T_n(\mathbf{x}) = \mathbf{x} [/math]

We provide an efficient optimization scheme by using line search with the gradient descent algorithm. For computational efficiency, we employ a stochastic subsampling procedure \cite{pluim}. In each iteration of the algorithm, a random subset is drawn from all samples and the objective function is evaluated only on this sample set. The number of samples to be used in this method depends on the number of the parameters of the deformation field. Using the number of samples on the order of the number of variables works well in practice.

We implemented our groupwise registration method in a multi-threaded fashion using Insight Toolkit (ITK) and made the implementation publicly available \cite{itk}. We run experiments using a dataset of 50 MR images with $256\times256\times128$ voxels on a workstation with four CPUs and 8GB of memory. The running time of the algorithm is about 20 minutes for affine registration and two days for non-rigid registration of the entire dataset. The memory requirement of the algorithm depends linearly on the number of input images and was around 3GB for our dataset.