Difference between revisions of "Projects:UtahAtlasSegmentation"

Automatic segmentation can be performed reliably using priors from brain atlases and an image generative model. We have developed a tool that provides an automatic segmentation pipeline in a modular framework. The processing pipeline is composed tasks such as filtering the input images, registering the multimodal input images and the brain atlas to a common space, followed by iterative steps which interleave segmentation, inhomogeneity correction, and atlas warping.

Our tool generates bias corrected images, fuzzy classification maps, and discrete segmentation labels. The tool has been used to automatically segment thousands of adult and toddler images from the University of North Carolina (UNC), and is also being used as a skull stripping mechanism for DTI processing at UNC and Utah. An example of the output of the tool is shown below.

Output of the segmentation plugin, showing the bias corrected image and the probabilities for white and gray matter. 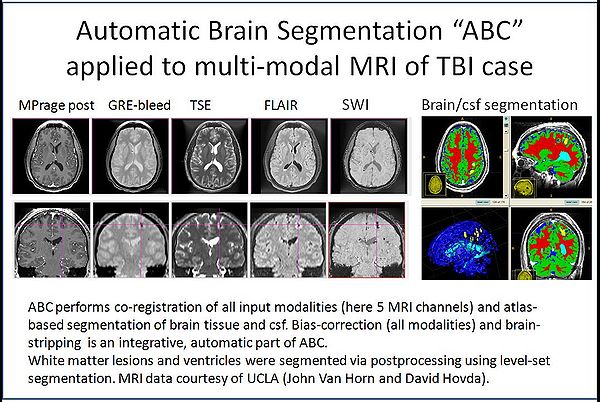 The tool has been integrated into Slicer as an extension, and it can also be executed as a stand-alone application. Both versions are available for download through NITRC: http://www.nitrc.org/projects/abc .

External use and modifications of ABC

A predicessor of ABC has been distributed to a large number of other research groups associated with ongoing image analysis projects at UNC Chapel Hill and the University of Utah, and to research groups linked to these investigators. High profile projects include the Silvio Conte Center (http://www.psychiatry.unc.edu/conte/, PI John H. Gilmore) with processing of over 1000 infant MRI, and the Autism Centers of Excellence Project IBIS (http://www.ibis-network.org/, PI Joseph Piven, UNC) where over 650 infant brain MRI will be processed with this tool. To segment infant brains with age range 6months to 2 years as part of this longitudinal study, new age-specific atlases have been developed to be used as spatial priors for ABC.

The ABC method has also been modified and extensively used by the University of Iowa, MIND Institute, Hans Johnson as part of a large, multi-center Huntington Disease study. Experience with a couple of hundred datasets at IOWA demonstrated the excellent robustness and reliability of the methodology.

Under guidance of Hans Johnson, a branch of the ABC NITRC code has been modified to meet the needs of the IOWA group. This includes integration of a new Bspline-based registration from BRAINSFit, integration of BRAINSROIAuto to make it work with data with arbitrary orientation, and modifications of the interface (svn to https://www.nitrc.org/svn/brains/BRAINS/trunk/BRAINSTools/BRAINSABC).

To meet still strong demands for a stand-alone MRI bias correction method, this part of the ABC code has been made available as a separate module and distributed via NITRC (http://www.nitrc.org/projects/probbiascor) by the MIND Institute Iowa group led by Hans Johnson.

Publications related to this software development