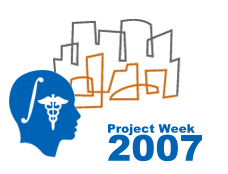 What's listed below is not yet prioritized! We'll list these in priority order (highest to lowest) after some discussion.

I'd like to have a discussion of GUI Testing/Tracing. In slicer3 we've started to experiment with a MRML-based tracing structure using the scene snapshot infrastructure, but we should consider if this is preferable to a GUI-based solution or not. See, for example, the vtkSlicerRecordSnapshotWidget.

Thanks to Brad Davis. I (Seb) also update some items above on the fly during the meeting.