Difference between revisions of "2014 Project Week:Ultrasound Visualization and Navigation in Neurosurgery" 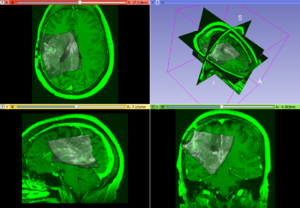 This project will investigate approaches to ultrasound-based visualization and navigation in the context of neurosurgery. The goal will be to develop a persistent representation of intra-operatively acquired 2D US data that can be visualized in conjunction with pre-operative MR data.