Difference between revisions of "Projects:AtlasBasedDTIFiberAnalyzerFramework"

This project aims to define an automatic framework for statistical comparison of fiber bundle diffusion properties between populations of diffusion weighted images.

Quality control is performed on diffusion weighted images and DTI images are computed for each individual subject. The data is then either mapped into a prior atlas or an unbiased diffeomorphic DTI atlas is generated from all datasets. This creates a normalized coordinate system for all diffusion images in a study. Fiber tracts of interest are generated on this atlas, and then mapped back to the individual subjects. Diffusion properties along fiber tracts, such as fractional anisotropy (FA), are modeled as multivariate functions of arc length and gathered in spreadsheets for statistical analysis.

DWI data suffers from inherent low SNR, overall long scanning time of multiple directional encoding with correspondingly large risk to encounter several kinds of artifacts. These artifacts can be too severe for a correct and stable estimation of the diffusion tensor. Thus, a quality control (QC) procedure is absolutely necessary for DTI studies. We developed a tool called DTIPrep which pipelines the QC steps with designated protocol use and report generation, and which generates DTI images and related scalar maps. The DTI QC is part of ongoing NAMIC research (More...)

Skull-stripping is performed on DTI images and scalar maps. Several methods can be used in that regard: 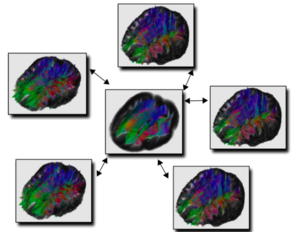 Unbiased diffeomorphic atlas building is used to compute a normalized coordinate system for populations of diffusion images. The diffeomorphic transformations between each subject and the atlas provide spatial normalization for the comparison of tract statistics. This is achieved via the DTIAtlasBuilder tool. 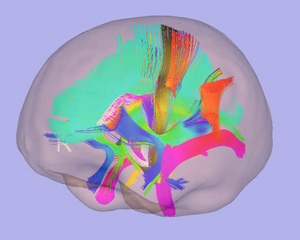 Tractography within 3D Slicer with FiberViewerLight:

Tractography is performed on the DTI atlas to generate a template geometry for tracts of interest. Several methods can be used in that regard:

Tracts generated on the DTI atlas often need to be cleaned up. FiberViewerLight performs such clustering via length, gravity, hausdorff and mean based methods, but also a normalized cut algorithm on pairwise mean distances. FiberViewerLight also provides 3D fibers visualization and 3D plane selection, for future FA analysis along fibers.

Fiber tracts defined on the atlas are mapped to the individual subjects using previously computed deformations fields. Various tract-oriented scalar diffusion measures obtained from DTI brain images, are treated as a continuous function of white matter fibers' arc-length. To analyze the trend along a given fiber tract, a command line tool performs kernel regression on this data. Fiber profile information are gathered across subjects in spreadsheets for statistical analysis.

Statistical analysis can be performed on fiber tracts to find cross-sectional or longitudinal intra- or interpatient differences. We currently employ the matlab based FADTTS analysis tool. A corresponding wrapper application for integration into DTIAtlasFiberAnalyzer is in progress.

Merging statistics back to the original fiber bundle:

MergeStatWithFiber - an application part of DTI Fiber Tracts Statistics (dtitractstat) package-, allows population statistical information to be merged back to the atlas fiber tracts of interest.

Statistically significant group and/or longitudinal differences can directly be displayed on fiber bundles of interest in 3D Slicer.