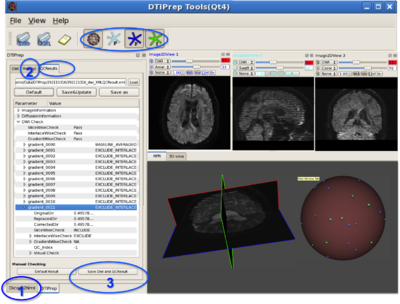 DWI-based QC results using DTIPrep through three steps: 1) converting dicom to nrrd format of DWI image, 2) loading the protocol and running the software and 3) potential needed of visual checking and final saving. In this example, gradient #11 suffers from intensity artifact and is excluded. The sphere shows 3D view of gradients distribution before and after running DTIPrep in blue and green colors respectively. 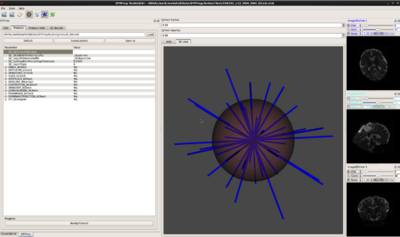 As theoretical work characterizing DTI grows, it is essential to increase its practical usability from a clinical environment perspective. Inherently, DWI images suffer from a vast variety of artifacts and the acquisition time for diffusion MRI is longer than conventional MRI due to the need for multiple acquisitions to obtain directionally encoded Diffusion Weighted Images (DWI). This leads to increased motion artifacts and reduced signal-to-noise ratio (SNR). Therefore, in a clinical environment, this imaging technique needs additional processes such as appropriate QC assessment methods to increase its practical usability. We are developing a framework, called DTIPrep, for assessing and correcting DWIs and DTI.

We have proposed new QC step for detecting drop-out signal intensities which can be caused by mechanical vibration artifacts. This step detects and potentially removes these residual artifacts that are not commonly detected in the individual DWIs. The artifacts appear in color-FA images in either widespread or local dominant direction. In order to detect such artifacts, we proposed a new approach via the entropy of the Principal Direction (PD) histogram computed over the major region of the image (e.g. the full brain). Given a prior knowledge of expected entropy values for acceptable scans, the quality of the DTI image is categorized into acceptable, suspicious and highly suspicious/rejection categories using calculated the standard scores.

Vibration artifacts. a) Artifact free scan. Top-left, a representative axial slice of the color-FA map. Top-right, spherical histogram of the PD distribution within the entire brain. Bottom-right, tractography of genu and splenium of the corpus callosum. Bottom-left, genu tract in more detail. (b) Vibration artifacts may manifest as localized (prefrontal region for this example) signal-loss in the DWI image or as dominant L-R (red) direction. (c) Vibration artifact in the absence of localize DWI signal loss. Spherical viewpoints chosen to show locations of highest histogram frequency.

For our correction step, we employed a simple, iterative leave-one-out-strategy over all individual DWI images by recomputing DTI images and correspond- ing entropies. At each iteration, the DWI with maximal improvement is removed and all leave-one-out entropies are recomputed. This process is continued until either the z-score is in acceptable range or a maximum threshold for exclusion is reached.

The correction results show visible improvement in contrast within the cingulum and fornix tracts (left) and fiber tractography of splenium (right).

It is important to note that there are some pitfalls associated with these QC approaches in the result of QC after correcting these artifacts. The correction processes modify a configuration of gradient sampling from a scan either by changing the gradients directions or excluding individual DWI’s along a subset of the gradients due to artifacts. Conventionally, QC procedures exclude artifact-affected DWIs from subsequent computations leading to a cleaned, reduced set of DWIs, called DWI-QC. Often, a rejection threshold is heuristically/empirically chosen above which the entire DWI-QC data is rendered unacceptable and thus no DTI is computed. In this work, we propose a simulation-based automatic DTI QC to assess the resulting tensor properties from DWI-QC techniques. We define two error metrics based on the directional distribution of bias for FA and PD. These metrics can provide a promising benchmark for post-QC assessment of the remaining DWIs. Based on our simulation results, we introduce rejection metrics (automatic thresholds) with respect to magnitude and directional distribution of bias for FA and PD.

In experimental results, we applied our method on acquisition schemes and also individual scans post-QC. These results show that the proposed rejection metrics provide an effective assessment of post-QC individual scan and also acquisition protocols. Furthermore, our results confirm that higher degrees of uniformity in the sampling gradients results in lower overall bias. Thus, determination of diffusion properties with minimal error requires an evenly distributed gradient directions before and after QC. This method will be incorporated in DTIPrep, used for QC of DWI/DTI data. 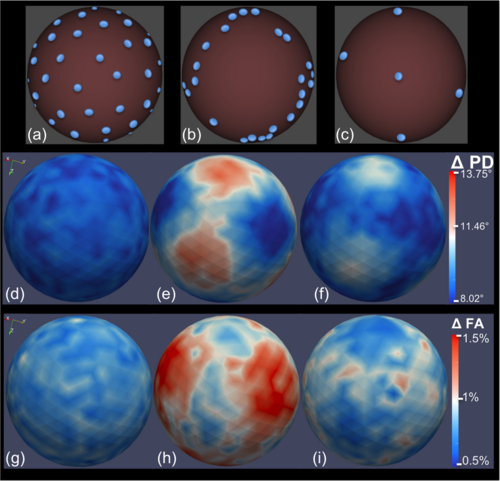 Scan-specific bias analysis via MC simulation. (a-b) The gradient direction distribution after excluding 20% of the total number of gradients due to artifacts, in two configurations: non-clustered and clustered exclusion (blue: excluded gradients, green: included gradients). (c) Estimated error distribution of PD computation given the gradient sampling schemes in (a) and (b). (d) Estimated error distribution in FA computation, shown as percentage of true FA. MC simulation was performed for 200,000 iterations for this experiment, with a true FA value of 0.4 and SNR = 10.