The Engineering component of the Computer Science Core (Core 1b) has been focusing on the infrastructure needed for the Algorithms component to implement their methods, and has been working closely with them so that the functionality we provide can serve to inspire new methods as well. Herein we provide more details regarding our accomplishments in those directions

As shown in Figure 1, 3D Slicer version 4.0 (commonly called Slicer4) is having an immediate world-wide impact. Version 4.0, released at the Radiology Society of North America (RSNA) meeting in late November 2011, is the result of a major effort by the NA-MIC engineering cores, in collaboration with the wider Slicer community, to re-implement and streamline the software in response to feedback from NA-MIC DBPs and algorithm developers. A new 3D Slicer version 4.1 release, being finalized at the time of this writing, adds back many of the advanced features of Slicer3, notably the Extension system by which new functionality can be downloaded and installed independent of the main executable. As described more fully below, these sweeping changes required touching not only most of the code in Slicer, but also feeding important feature and bug fix changes back into the rest of the NA-MIC Kit and upstream libraries. As a result of these efforts, 3D Slicer in now an improved reference implementation of a modern medical image computing package and a strong foundation for research. 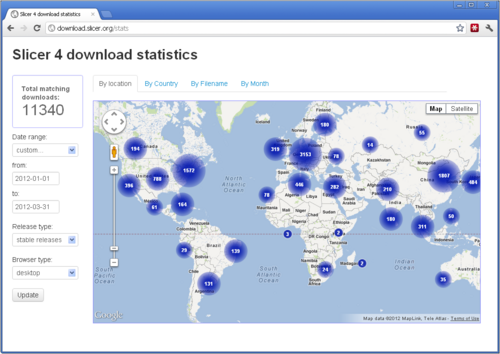 Figure 1: 3D Slicer version 4.0 end-user downloads during the first 3 months of 2012, a rate of 45,360 per year (over 100 downloads per day). Interactive geolocated download statistics are available at http://download.slicer.org/stats.

With the introduction of the Slicer4 Extension system we plan to stabilize the core slicer distribution and move to less frequent releases with more of the algorithm innovation becoming available through as Extensions. This will allow further stabilization and streamlining of the core while speeding up the delivery of new technologies to end users for testing.

Efforts in the Computational Platform have focused on developing a general and flexible computing architecture and analysis platform to meet the needs of NA-MIC scientists and engineers as well as the larger medical imaging community.

At the time of this writing, 3D Slicer 4.1 is being finalized. After the release of Slicer 4.1, the Slicer development codebase will migrate to using ITK version 4. This migration will enable new image registration methods, introduce SimpleITK APIs, and introduce GPU support for image analysis algorithms. Other plans for the Computational Platform include further developments for interactive analysis methods, infrastructure for private cloud computing, and interfaces for statistical analysis.

Efforts in the Data Management Platform have focused on (1) developing an ergonomic user interface and internal networking logical to efficiently exchange data between Slicer and XNAT and (2) expanding Slicer's support for importing from and exporting to local DICOM Objects and networked DICOM PACS.

The bulk of the effort in the coming year will continue to focus on (1) the user interface and networking logic for remote data management in XNAT and (2) import and export of Slicer results (i.e., entire MRML scenes) as DICOM objects. Regarding XNAT, as the initial development completes, we will turn to developing more efficient mechanisms for caching data locally and synchronizing local caches with remote repositories. Regarding importing and exporting Slicer data as DICOM objects, we are pursuing the concept of a DICOM Lollipop. In a DICOM Lollipop, a complete Slicer (MRML) Scene, with annotations, segmentations, viewing conditions, etc, can be saved as a binary payload in a standard DICOM object. In this manner, Slicer's data can be pushed/pulled from PACS for integration with and sharing across hospital workflows.

The goal of the Community Software Process effort is to provide tools and processes that make it easy for algorithms developers to contribute methods to the NA-MIC Kit, while maintaining the NA-MIC Kit's high-quality software standards.

This year, we have seen massive expansion and significant stabilization of the NA-MIC Kit. While these two accomplishments may seem at odds, they actually represent the planned progression of our community software processes. The specific aims and approaches we pursued to achieve these accomplishments are as follows:

The planned efforts of the Community Software Processes are continuations of ongoing work:

The NA-MIC Kit is designed to accelerate the pace of research and facilitate clinical evaluation. It provides (a) a flexible yet stable execution and visualization engine with strong support for clinical data (Slicer), (b) methods for extending that platform and sharing those extensions with others, and (c) tools for community software development. The major components of the NA-MIC Kit are illustrated in Fig. 2. 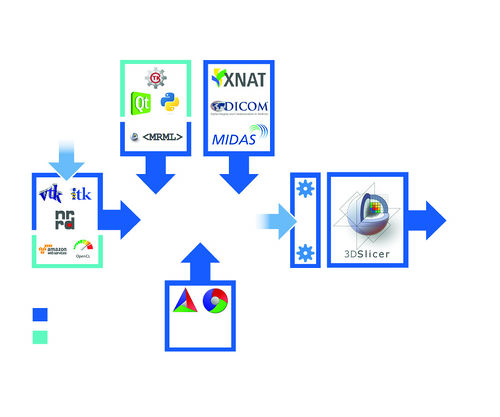 Figure 2. The NA-MIC Kit is a collection of applications, libraries, and processes for bridging algorithm developers, engineers, and clinical researchers. Slicer is the primary vehicle for deploying algorithms. The other components of the NA-MIC Kit addresses the critical yet often overlooked elements of data sharing, integration into clinical workflows, code quality assurance, cross-platform development, and much more.

As mentioned in Section 5.2., Slicer has undergone massive expansion while also achieving improved stability. The same is true for the NA-MIC Kit as a whole. This evolution represents a maturation of our tools as well as the community. Open-source software, good software practices, and our tools are becoming the leading standards in our fields. Large communities of users and developers are forming around many of the components that we have chosen to use and that we have created for the NA-MIC Kit. The many improvements and new features of Slicer are discussed in Section 5.2. Below we highlights the evolution of the other tools in the NA-MIC:

We are proposing to offer quarterly releases of the NA-MIC Kit and Slicer. Highlights from the recent releases and plans for future releases are given next.