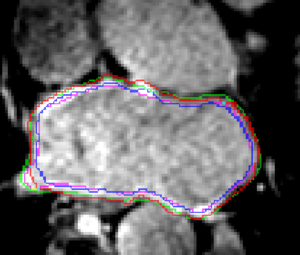 We plan to implement this algorithm as a Slicer command-line module.

This module is nearly complete, and visualization of the output result is much better but will need some bug fixes such as proper centering. We have decided to store the training model data on a website like Midas, and leave it to the user to download the data. We will soon make it available in the nightly Slicer build.