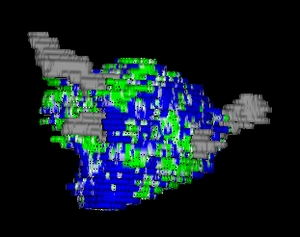 An example of a thresholded isosurface. Blue: Below threshold, Green: Above threshold.

We have discussed with Steve and Jim and have decided to write a loadable module in Slicer which will be able to display the regions of scar on the isosurface of the LA endocardium wall. Regions of scar will be colored using scalars stored in the .vtk model file. Thresholding of the model will involve rewriting the .vtk file and generating a new isosurface in Slicer. (See example of a thresholded isosurface above.)

This work will be delivered to the NA-MIC Kit as a Slicer loadable module.