This project proposes a framework for quantitative analysis of DTI data. The framework uses the full tensor information for statistical analysis using the affine-invariant Riemannian metric for defining operations such as interpolation and averaging on tensors. Furtheremore, the results of tractography are used to provide a reference coordinate system the respresents the underlying structure of fiber bundles. The tract modeling framework includes a model both of the geometry of the fiber bundle and of the diffusion properties along the bundle. A new anisotropy measure called geodesic anisotropy (GA) is also included in the framework. 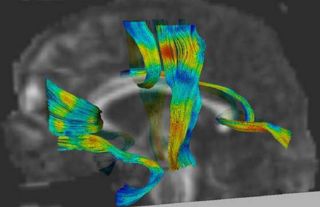 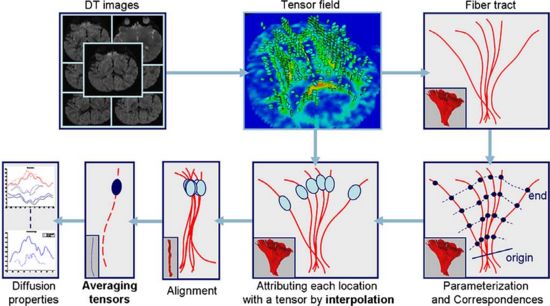 Our methodology for population analysis of DT-MRI is based on unbiased non-rigid registration of a population to a common coordinate system. The registration jointly produces an average DTI atlas, which is unbiased with respect to the choice of a template image, along with diffeomorphic correspondence between each image. The registration image match metric uses a feature detector for thin fiber structures of white matter, and interpolation and averaging of diffusion tensors use the Riemannian symmetric space framework. The anatomically significant correspondence provides a basis for comparison of tensor features and fiber tract geometry in clinical studies.

Our registration procedure is based on a scalar feature image which is sensitive to sheet like structures. We have observed that the major fiber bundles of interest occur as sheet or tube like manifolds in the FA image of the brain. As a feature image we use the maximum eigenvalue of the hessian of the FA image. Images are initially aligned using an affine registration and then deformed to a common coordinate system using the unbiased atlas-building procedure of Joshi et al. [1]. The deformation fields produced by the registration process are applied to the tensors fields using appropriate methods for reorienting and interpolating tensors. The transformed images are averaged in the atlas space to produce a DTI atlas.

An initial test was performed by using the procedure on a set of images of healthy subject at age one year. The results of the tensor averaging are shown on the right. Tractography was also performed on the mean atlas image as shown.

We have begun to apply the DTI atlas building procedure to data provided by the PNL. A combined set of DTI scans from control and Schizophrenic subjects were aligned using the procedure described above. In the atlas space the SZ and CNTL groups are processed to produce voxel-wise statistics for each group. The figure below shows colored FA and mean diffusivity slices for both the CNTL and SZ group. Preliminary work is now being done on region of interest (ROI) hypothesis testing between the two populations.

Clinical time limitations on the acquisition of diffusion weighted volumes in DTI present several key challenges for quantiative statistics of diffusion tensors and tensor-derived measures. First, the signal to noise ratio (SNR) in each individual diffusion weighted volume is relatively low due to the need for quick acquisition. Secondly, the presence of Rician noise in MR imaging can introduce bias in the estimation of anisotropy and trace. Unlike structural MRI where intensities are primarily used to obtain contrast, the goal of DTI is to quantify the local diffusion properties in each voxel. Therefore, an understanding of the influence of imaging noise on the distribution of measured values is important to understand the results of statistical analysis and to design new imaging protocols.