Back to NA-MIC External Collaborations 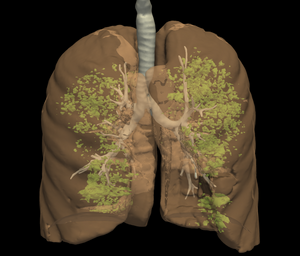 Burden of emphysema in a COPD subject

Chronic Obstructive Pulmonary Disease (COPD) is the fourth leading cause of death in the United States and an important public health issue [8]. An estimated 24 million individuals in the U.S. may be affected by COPD [12]. Both the number of affected individuals and the number of deaths from COPD are expected to increase as the population ages [11]. COPD is a heterogeneous condition, with a variety of disease-related phenotypes [3,16]. Better understanding of the disease mechanisms is needed to develop effective treatments and prevention strategies. To accomplish this, we need improved understanding of the etiology of COPD, clinical classifications of the disease that are biologically and medically coherent, and knowledge of genetic factors that influence risk of COPD. COPD is strongly associated with smoking, but only a minority of smokers will develop COPD, suggesting that there may be unique genetic differences among individuals leading to greater susceptibility to the most adverse effects of cigarette smoke in some individuals [10]. Relatives of COPD patients show an increased prevalence of airflow obstruction, which supports a role for genetic factors predisposing smokers to COPD [1,9,13]. Smokers with first degree relatives affected by COPD have two to three times the risk of developing disease [13,17]. Genetic factors have been associated with response to lung volume reduction surgery [6] as well as specific patterns of emphysema [2] and degree of functional impairment [5]. Estimated heritability for decline in lung function with age using parent-offspring pairs who both smoke are 0.18 for FEV1 and 0.39 for FVC [4]. Because COPD is likely the result of multiple genes, some of which may interact with environment risk factors (primarily smoking), estimates of heritability that do not include the effects of smoking on lung function are likely to underestimate the true genetic component in COPD. The Genetic Epidemiology of COPD (COPDGene®) Study was designed to identify genetic factors in COPD, to define and characterize disease-related phenotypes and to assess the association of disease-related phenotypes with the identified susceptibility genes. This multi-center study is funded by the National Heart, Lung and Blood Institute (NHLBI). A key feature of the project is to enroll a large cohort (10,000) of subjects, spanning the breadth of disease severity including smokers and non-smokers without COPD as controls. Two groups are being studied: Non-Hispanic Whites and Non-Hispanic African Americans.

The primary goals of the study are: 1) Phenotypic characterization of COPD subjects using computed tomography, as well as clinical and physiological measures, to separate the COPD syndrome into significant distinct subtypes that may be more etiologically homogeneous. 2) Utilize genome-wide association studies to provide insight into the genetic risk factors for COPD and its subtypes.

CT scans are acquired using multi-detector CT scanners (at least 16 detector channels). Volumetric CT acquisitions are obtained both on full inspiration (200mAs), and at the end of normal expiration (50 mAs). Image reconstruction utilizes sub-millimeter slice thickness, with smooth and edge-enhancing algorithms. The quantitative analysis of the data is carried out by our imaging groups at National Jewish Hospital in Denver and Brigham and Women's Hospital in Boston.

COPD is a disease with important public health implications given its often profound effects on functional capacity, quality of life and mortality. At this time there is a dearth of effective disease treatments for moderate to severe disease or effective secondary prevention strategies for early or occult disease. Further progress in these areas is hampered by the long latency period between smoking exposure and development of clinical disease, as well as by a relatively small proportion of smokers who develop symptomatic disease. Wide variation in disease expression patterns (airway disease, emphysema, extrapulmonary effects and patterns of exacerbations) may limit statistical power to detect successful results within these subsets in therapeutic trials. COPDGene® with its large population and focus on CT phenotypes proposes to define subsets of COPD that may reflect effects of specific genetic variants. Careful CT phenotyping may generate diagnostic imaging biomarkers and permit early disease identification in high risk groups. This early diagnosis of asymptomatic disease will provide new opportunities to develop prevention strategies and treatment to limit disease progression. Available treatments will also spur new efforts to encourage screening for early disease in smokers with continued emphasis on smoking cessation. The genetic associations expected from performing GWAS in this large cohort may reveal novel directions for defining disease mechanisms while advancing knowledge about basic mechanisms and also providing opportunities for treatment and prevention. Finally, the wealth of data to be accrued in COPDGene® will be stored and made available to the broader scientific community for future studies. This will include the detailed phenotypic subject information, whole genome data and the imaging data from CT scans.

The project described is being supported by Award Numbers U01HL089897 and U01HL089856 from the National Heart, Lung, And Blood Institute.