The main goal of this project is to develop end-to-end application that would be used to characterize anatomical connectivity abnormalities in the brain of patients with velocardiofacial syndrome (VCFS), and to link this information with deficits in schizophrenia. This page describes the technology roadmap for stochastic tractography, using newly acquired 3T data, NAMIC tools and slicer 3.

Figure 3: Streamline vs. stochastic tractography of the Internal Capsule

One can smooth the DWI data (only Gausian smoothing is supported at this time). We recommend it if the data is noisy.

The Brain mask defines the volume in which the tensor will be computed and the tracts evaluated. If Enabled, will use threshold values on the baseline instead of WM Mask defined in IO panel.

Chooses the way the nhdrs are read.

Parameters that need to be adjusted:

1. Total Tracts: The amount of tracts that will be seeded from each voxel (we recommend between 500 and 1000 tracts, depending on the workstation power- 1000 tracts per voxel seeded within the large ROI for high resolution DWI can take a long time to compute).
2. Maximum tract length: (in mm) This can eliminate long, unwanted tracts if the regions for which connection is measured are located close to each other
3. Step Size(mm): distance between each re-estimation of tensors, usually between 0.5 and 1 mm. Adjust to make sure step size is not larger than the voxel spacing in any direction, which would allow voxels to be "jumped over."
4. Stopping criteria: This can be used on the top of WM mask to terminate tracts when FA drops below supplied threshold (in case they frequently travel through CSF, for example).
5. Use Basic Method: switches between Friman and McGraw algorithms.

This step will reject tracts whose endpoints are lower than the threshold value.

This will make the ROI a sphere based on the ROI’s center of gravity (with the sphere’s radius being the distance from the center to the ROI’s furthest point). This sphere can be inflated by raising the Vicinity level to the number of steps you’d like to increase the ROI’s size by.

This step traces back n number of steps from tract endpoint to check if track crosses target ROI. If so, tract is included.

Then, probability maps can be saved as ROIs, and either used directly, or thresholded (at certain probability, step claimed by few publications to remove noise) in slicer to mask and compute average FA, Mode, Trace for entire connection. Diffusion indices can be also weighted by the probability of connection for each voxel.

Figure 6: Stochastic tractography from a single ROI on helix phantom

A - Optimization and testing of stochastic tractography algorithm

Figure 7: The arcuate fasciculus including seed, midpoint and target ROI's.

We are investigating Arcuate Fasciculus using Stochastic Tractography (Figure 7). This structure is especially important in both VCFS and schizophrenia, as it connects language related areas (Brocka and Wernicke's), and is involved in language processing quite disturbed in schizophrenia patients. It also can not be reliably traced using deterministic tractography. 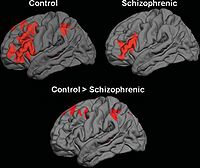 We use combination of fMRI and DTI data to define and characterize functional and anatomical connectivity within the semantic processing network in schizophrenia. 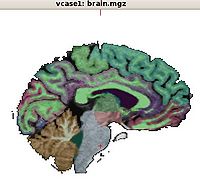 We use combination of structural MRI and DTI to investigate anatomical abnormalities that would characterize patients with VCFS, and relationship of these abnormalities to those observed in schizophrenia.

We are collaborating with the Department of Neurophysiology Max Planck Institute in Frankfurt (Anna Rotarska contact person), where we use stochastic tractography to measure integrity of anatomical connections within the default network in schizophrenia. The fMRI resting state results (ROIs) have been co-registered with anatomical scans, and then again registered to DTI space. Figure 8 shows pilot data of the white matter connections through the corpus callosum between the left and the right auditory cortex ROIs as defined by fMRI data.

We are using stochastic tractography to examine white matter connectivity between medial anterior and posterior OFC and rostral ACC (cognitive part of ACC). 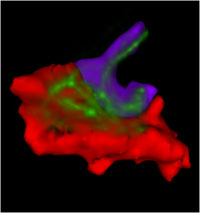 We use stochastic tractography to segment thalamus into discrete ROIs based on its connectivity to 10 cortical ROIs (for each hemisphere) of the frontal lobe. Cortical ROIs are extracted using free surfer, and co-registered to DTI space using FSL. Thalamus is painted by connectivity using additional in-house matlab script (available after request). Volumes of the thalamic ROIs as well as FA for each individual connection are our measures of interest. 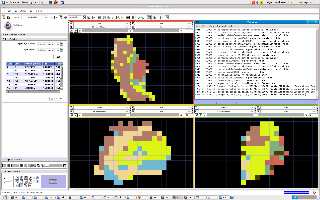 Figure 12: Thalamus parcellation into discrete ROIs based on its connectivity to 10 cortical ROIs using stochastic tracking.

We are also working on a tractography comparison projectdataset, where we apply stochastic tractography to phantom, as well as test dataset.