Studies performed by the Psychiatry Neuroimaging Laboratory (PNL) rely on automatic segmentation of gray matter, white matter and cerebrospinal fluid (CSF) from brain MR images. We are interested in a segementation pipeline that (i) requires minimal human interaction, and is (ii) easy to maintain and control from a technical point of view. In the following the results of such a new method are compared to the results from our current segementation pipeline.

So far for every scanned volume involved in studies has been segmented into white matter, gray matter and CSF using the following four step segmentation pipeline:

The EMAtlasBrainClassifier module basically implements the same expectation maximization algorithm as the Tcl script used in the current PNL processing pipeline. However, this module performs all four processing steps with a single button press. The user has to define the structural volume and the corresponding T2 volume and decides if step one (coregistration) is needed or not. Furthermore the user can turn on/off the output of various intermediate results of the segmentation algorithm under ”Advanced Tab”. Figure 1 shows a screenshot of the user interface of the EMAtlasBrainClassifier Module in Slicer.

An important feature is the possibility to toggle multi threading. Segmentation results were found to be dependent on the number of CPUs. This is due to the parallel implementation of the segmentation algorithm. To guarantee comparable results between computers with different numbers of CPUs, multithreading will be turned off in our new processing pipeline.

1.4 Motivation for the new pipeline

The new segmentation strategy only requires one click to initiate the process compared to four processing steps required by the old processing pipeline. Furthermore multithreading can be toggled with the Slicer module. The open source nature of 3DSlicer allows for the continuous integration of new, state-of-the art processing algorithms as well as the constant improvement of already existing modules. To assure the correctness of the EMSegmentation module output after a 3DSlicer update, we run an automated testing process comparing current module output to an expected module output for certain test cases.

The test result is automatically submitted to a webpage using the dashboard technology developed by Kitware.

Seventy-eight cases of the PNL database for which the segmentation had already been created using the current pipeline were selected. We aimed to cover all disease databases in our lab in order to compare segmentation performance for all different disease-specific brain physiologies.

The following cases were selected:

Quantities were chosen depending on the amount of cases we have within each database.

By batch processing the EMAtlasBrainClassifier module in 3DSlicer, release 2.6, we generated the segmentation into gray matter, white matter, and CSF for each of the listed 78 cases. In order to compare old and new segmentation implementations the following measurements were calculated by a script written in Matlab: 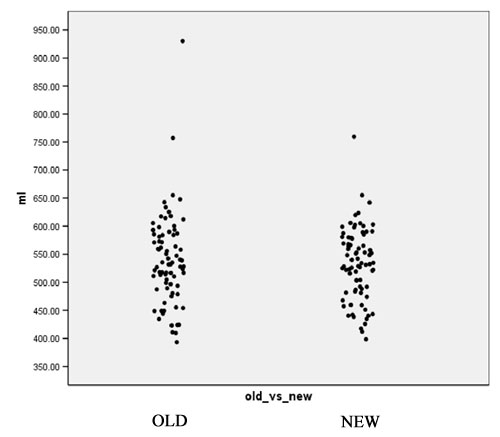 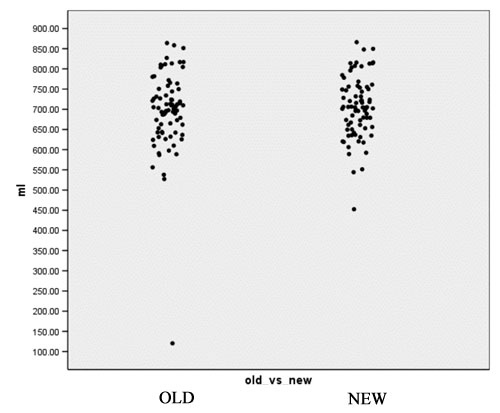 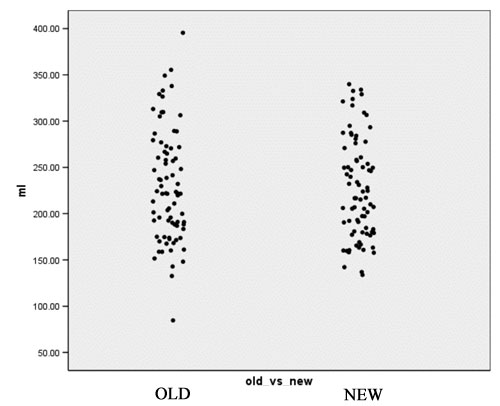 This measure ranges from –1 to +1. When volume difference equals zero, exactly the same volume of this tissue class has been segmented for this case with both new and old methods. A negative value means more tissue was segmented by the new segmentation strategy compared to the old one.

A positive volume difference means for this case more tissue was segmented by the old segmentation strategy.

The scatter plot in figure 5 visualizes the volume difference for white matter, gray matter, and CSF. 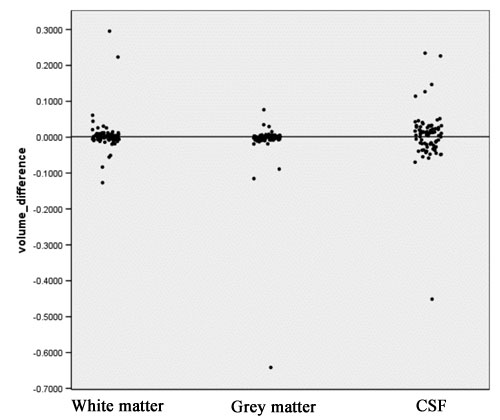 The Jaccard measure is defined by the equation:

Jaccard ranges from 0 (segmentations do not overlap at all) to +1 (segmentations completely agree). This measure is probably the most meaningful amongst those computed in the context of segmentation comparison. Figure 6 shows scatter plots for the Jaccard measure for white matter, grey matter and CSF. 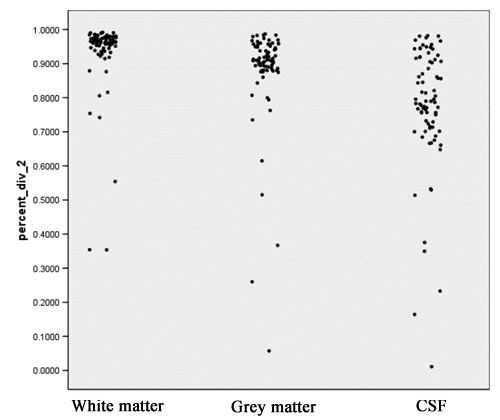 There are some cases where the Jaccard measure indicates that the segmentations do not overlap well. We had a closer look at those outliers.

We selected all cases where the Jaccard measure for white matter was below 90% and defined those as outliers. A visual inspection yields a failure of the old segmentation method for 3 cases within those 9 outliers. This affects one case of a normal control located in the male SPD database and 2 cases in the FEBS database. For another 3 of those 9 outliers it turned out that the new segmentation method had failed. Those cases with an insufficient new segmentation result are located in the male chronic-schizophrenia database, the first-episode-schizophrenia database and the VCFS database. For the remaining 3 cases of the 9 outliers a visual inspection could not determine which segmentation is better or closer to the truth, respectively.

Volume differences and Jaccard measure distribution, with outliers removed, are shown in Figures 12 and 13. 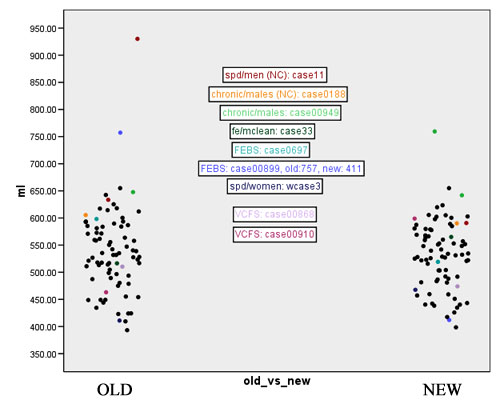 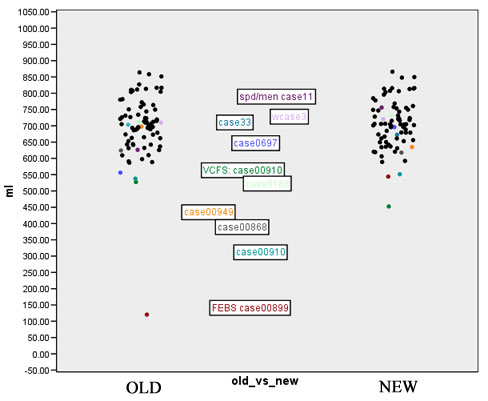 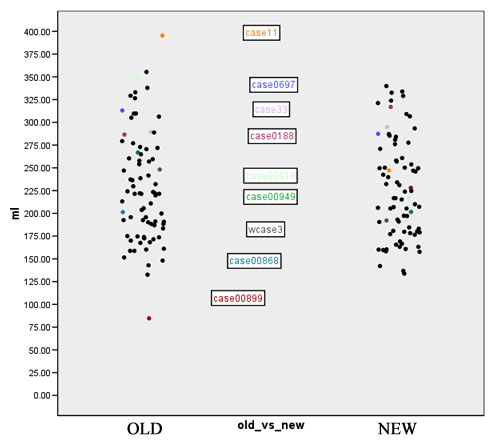 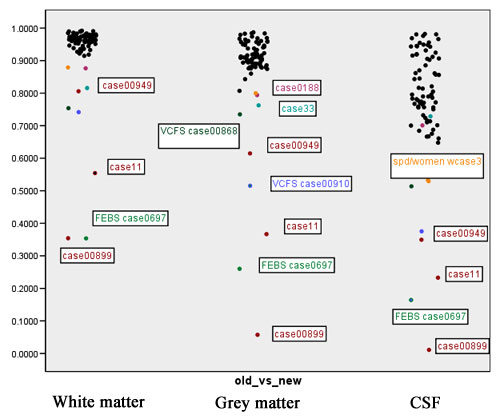 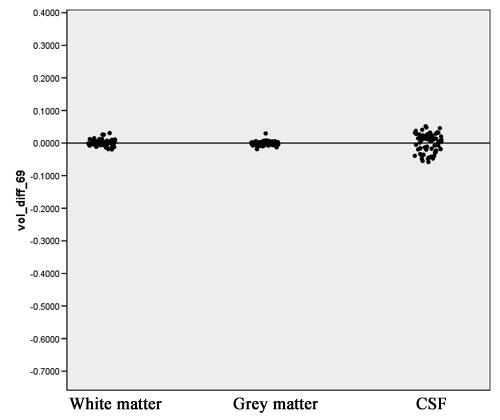 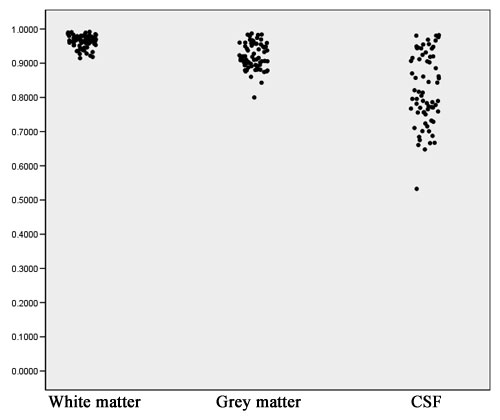 Based on these observations and after discussion with Drs. Shenton and McCarley we decided to use the new method which is the EMSegmentation Module in 3DSlicer.

Assessing and comparing segmentation performance for different algorithm implementations is crucial to ensure reliable results for our neuroscience studies. Such an assessment and comparison should be performed for every future software change.