There will be a all hands meeting for the NCBC program at NIH.

Russ Altman will be giving a 10 minutes overview over the entire NCBC program. He has reqested from each of the NCBCs the following information about accomplishments.

A short summary of the original and renewal DBPs (this will also be used in the DBP sig breakout session). Basically title and one paragraph description.

1) During the first three years of NA-MIC, Core 3 consisted of four DBPs which were grouped into two thrusts.

2) Starting with the 4th year of NA-MIC, the DBPs were shifted from schizophrenia to lupus, autism, velocardiofacial syndrome (VCSF), and prostate cancer.

1) A few key journal publications that have emerged directly from each center (say the top 5 per center). These should not be presented in a center-specific context but just to show the volume and quality of scientific production. You should be able to get these directly from your progress reports.

2) Some statistics of publications: total number in the last year or cumulative. Again, these should be presented in aggregate rather than by center. 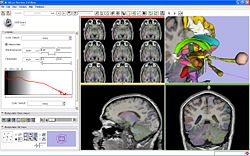 Go to the NA-MIC Kit

A list of tools produced by the center with one or two highlights where you have high volume download or many journal citations. 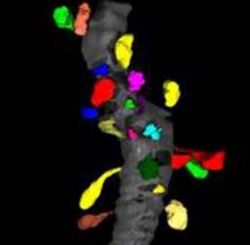 A small fragment of a dendrite (gray) with segmented spines (color).

NA-MIC is a multi-institutional, interdisciplinary team of computer scientists, software engineers, and medical investigators who develop computational tools for the analysis and visualization of medical image data. The purpose of the center is to provide the infrastructure and environment for the development of computational algorithms and open source technologies, and then oversee the training and dissemination of these tools to the medical research community. This world-class software and development environment serves as a foundation for accelerating the development and deployment of computational tools that are readily accessible to the medical research community. The team combines cutting-edge computer vision research (to create medical imaging analysis algorithms) with state of the art software engineering techniques (based on "extreme" programming techniques in a distributed, open-source environment) to enable computational examination of both basic neuroscience and neurological disorders. In developing this infrastructure resource, the team is significantly expanding upon proven open systems technology and platforms.

The driving biological projects for NA-MIC include the study of autism, lupus, prostate cancer, VCSF, and schizophrenia, but the methods are applicable to many other diseases. The computational tools developed in NA-MIC are used to perform image-analysis at a range of scales, and across a range of modalities including diffusion MRI, quantitative ECG, and metabolic and receptor PET, but potentially including microscopic, genomic, and other image data. It applies to image data from individual patients, and to studies executed across large populations. The data is taken from subjects across a wide range of time scales and ultimately apply to a broad range of diseases in a broad range of organs.