Slicer 3 contains a number of different ways to register two images. In this document we will examine the results of these modules on three different cases. The convention used will be (moving image) -> (fixed image) = (resulting moved image). The cases are:

All cases were completed using the nightly build of SLicer 3 provided on 3-31-09. No settings were changed, the parameters were left at Slicer3 defaults.

Talk to Andrew Rausch, rauscha@bwh.harvard.edu for more info. I'm no expert on registration, but I can tell you exactly how each of these were performed and provide mrmls and nrrds.

A concise comparison of FSL and slicer registrations can be found here.

The data set used for testing can be downloaded here.

There and back registration

In this case we take the 01053-t2w nrrd as our moving image and the 01031-t1 nrrd as our fixed, register them and save the result, then move that result to the fixed 01053-t2w image. Not all of these transformations are totally reversible, but for the most part if they can be registered one way, they should be able to be registered back to exactly the same spot. It never works quite perfectly though, so the errors/distortions are detailed below.

The image shows these side by side. The are nearly the same except for the loss of fine detail.

The image shows lin2 and 53-t2 side by side. The image shows there appears to be some change beyond loss of detail, possibly a L-R shift in the front.

Significant blurring, but every feature is in it's proper place.

The brain appears to be shifted slightly leftward, as the contours around the edges do not perfectly match. There also is a tilt forward around the L-R axis. Grey value shift.

Pipe Bspline: very blurred, bad distortions, esp. cerebellum (NOTE: this picture has the images reversed, with the registered image appearing on the left)

There is pinching towards the corpus callosum, strange distortions near the cerebellum, many distortions around the skull, very poor overall.

Only linear methods produce transforms that can be used to register a label map. Unfortunately, a linear registration can never account for the distortions of a DTI image, and as such there is no way to get a good registration of structural label maps to DTI space. In Slicer 2, I can create a transform node and do an automatic registration between two already created nrrds based on intensity via diff. demons or bspline, and then apply that transform to a label map, but I don't know of any way to get a similar transform in Slicer3. 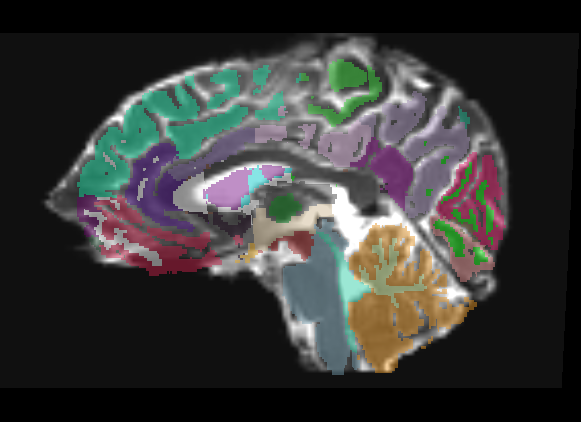 The overlay has only a few places where it is usable, only in the center of ROIs you'll probably be in the same region on the DTI. 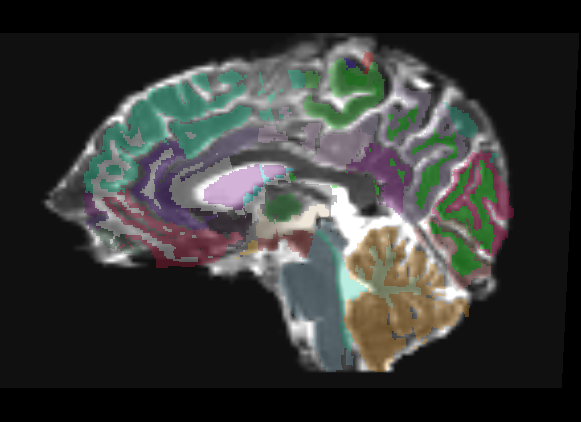 The overlay is useful in roughly the middle third of the brain, distortion of DTI means linear transform cannot match in the front or back of brain. 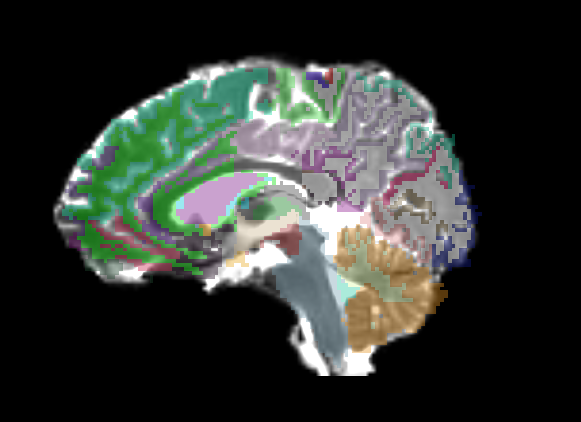 Archana's affine registration: some problems in the back of the brain, but reasonable registration in front. Still some mismatch with DTI distortion.

Archana is an MIT grad student working on fMRI -> DTI registration. She used an affine transformation of some sort (I'm pretty sure it wasn't Slicer) to register a masked T2 to the masked DTI baseline, and transformed the freesurfer aseg the same way. You can see her registration has the same problems in the back of the brain, going beyond the borders of our image, but there is better registration in the front, matching up to the DTI distortion.

Fits the cortex on the baseline to the skull on the t2. Retry with a skull stripped t2.

Demons case 2: Terrible distortions everywhere, unclear what it was trying to match.

Rigid: Poor matching. Only good in roughly middle 1/4 of brain.

Rigid then Linear: Roughly the same as rigid only, though further registration degrades sharpness.

Brain tilted properly, matches in pretty much the same places as a Rigid transformation. It looks even blurrier now that it has gone through two registrations.

Rigid then linear then affine: Appears to be matching bright ventricles and bright cerebellum.

Clearly completely unusable. Bright ventricle of structural appears to be aligned with ventricles and bright region of cerebellum.

For the middle of the brain, this is acceptable, near front and rear registration can be off by whole gyri. Looking at axial view, clearly not turned the same direction as the DTI baseline.

This matches the two brain's borders very well. The structural expands to fill most of the DTI image's distortions. In the process, the gyrii in the frontal lobe are thrown all over the place, off by large margins. The middle is closer, and the rear of the brain is again poorly matched, though it has expanded to fill the DTI image distortion.

Rigid then Linear then bspline: Relatively good matching. Except for bottom of frontal lobe and small parts of occipital, an acceptable transformation.

Relatively close, compared to other transformations. Minor areas of frontal lobe are mismatched, especially near the bottom, and a small section of the occipital lobe is off, but overall gyri and sulci are matched well.

Demons: Yes, this is really the result. Not even in the same space, and I can't actually get it to show any more of the brain than what is here.

Demons Registration clearly has some problems. I can't get even a viewable image to result.

Rigid: not really even centered properly. Nothing matches well.

While the T2 has been moved, it really isn't accurate at any part. None of the image can be properly matched to the corresponding part of the DTI.

Affine: Not really even close. Stretching everywhere and centered the same, but that's it.

Might there be some problem with the way I'm setting this up? Image does not match. Is not rotated, is shifted to roughly the same area, unclear why it is stretched where it is.

None of these registrations seem to be getting even close to accurate results, so until I get advice on what settings to use to correct this, I'm going to hold off on further testing of this section.

01053>01031linear.png = not bad... different brains of different sizes, but seem to be aligned in the ventricles so output seems okay.output slightly blurry. bad initial leveling displays.

01053>01031_demons.png = 10 minutes. Window/leveling initially off. Otherwise, it looks really good. Not much distortion.

01053>01031_RI_rigid.png - center ventricles are mostly aligned, but not perfectly. in axial view, brain is more crooked than in initial scan... especially in frontal lobe.

01053>01031_RI_affine.png - ventricles aligned well. sizing decent. looks how one would expect affine to look. not perfect subcortically. some distortion, esp in temporal lobe.

01053>01031_RI_bspline.png - good result. ventricles aligned well, but temporal lobe size is not the same as the target image.

01053>01031_RI_pipe_rigid.png - shifted version of the original image. decent registration in the ventricles.

01053>01031_RI_pipe_affine.png - decent coreg. a bit of distortion in the frontal and temporal lobes, esp around the corpus collosum.

01053>01031_RI_pipe_bspline.png - good coregistration, but pretty blurred. also, I would have expected the temporal lobe to be coregistered better.

At Marek's request, Doug has attempted to register the t1 structural images to the dwi-baseline images of Anna's data. Being different types of images, they do not register well. Examples follow.

On the left is the structural t1 image, on the right is the dwi baseline image.

Though it has been recommended to always go through a pipeline before using a non-linear registration, We've given a B-spline only registration a try. This is Slicer 3's separate Bspline module. Unsurprisingly, it works extremely poorly. The brain is barely recognizable any longer, with strange curvatures at the top, gross enlargement of the middle third (S-I) and unclear registration along the very bottom, stretching out along the entire image.

Left side is the registered image. It is not clear what it is trying to match the brain to. There are no well matched points in the brain.

The image has been expanded radially outward, not clearly matching to any features of the DTI baseline.

Left side is registered image. The size scales are exactly the same, the registered brain simply doesn't fit to anything.

Linear to Affine to Bspline

As suggested, in this test we registered the image via linear, then affine, then bspline modules in Slicer 3. Again the registration is largely incomprehensible.

On the left is the structural t1 image, on the right is the dwi baseline image. Barely any matching.

On the left is the structural t1 image, on the right is the dwi baseline image.
Retrieved from "https://www.na-mic.org/w/index.php?title=Projects:DBP2:Harvard:Registration_Documentation&oldid=37615"