In the past, we have demonstrated ways to characterize the strength of connectivity between selected regions in the brain based on several alternative ways to integrate local diffusion tensor measurements into a global field that provided connection strength estimates for distant points. Our current work aims to provide structural description of the white matter as partitioned into coherent fiber bundles and clusters, allowing automatic segmentation of tractography. Furthermore, we are using the segmentation method to enable analysis of diffusion properties along white matter fiber tracts (see the new tract-based morphometry method and the tumor measurement project, below).

We are developing tools in the 3D Slicer for automatic clustering of tractographic paths through diffusion tensor MRI (DTI) data. By grouping tractographic paths based on shape and location, the white matter architecture may be more clearly visualized, and interesting properties of the clusters (such as for example FA or Westin's linear measure) may be quantified. 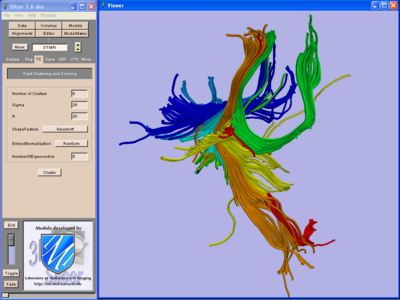 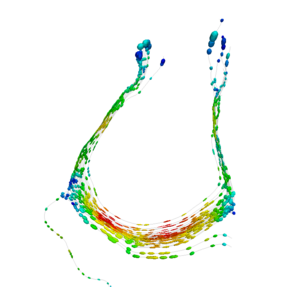 This image shows the same fibers as the bright green cluster in the previous image (part of the corpus callosum). Here randomly sampled tensors are displayed along the paths and colored with Westin's linear measure.

Our implementation uses spectral clustering, a method for grouping data using eigenvectors of a data affinity matrix. This image gives an overview of the method. On the left example input tractographic paths are shown (these were created by manually seeding in the 3D Slicer). The center image shows an embedding of the tracts as points in 2D, where the distance between points is related to their shape similarity. This embedding was calculated as an intermediate step during spectral clustering. The image on the right shows the final output in the 3D Slicer, where tractographic paths are colored by cluster membership.

Multisubject statistical analyses of DTI in regions of specific white matter tracts have commonly measured only the mean value of a scalar invariant such as the fractional anisotropy (FA). The spatial patterns of FA along fiber tracts have not yet been studied in detail due to the difficulty of finding pointwise correspondences along the lengths of tracts from multiple subjects. We are investigating a new method for calculation of multisubject tract arc length coordinate systems, enabling tract-based morphometry (TBM), the group statistical analysis of tensors or scalar invariants along the length of fiber tracts.

Arc length coordinates (in color) for one subject.

Arc length coordinates (in color) for another subject. 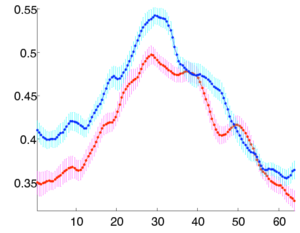 Mean FA along tract (32 subjects). The left hemisphere FA is shown in blue and the right in red, and anterior is to the left in the plot. Each point represents the mean of subject mean FA values at that arc length coordinate. Bars are standard error across subject means. 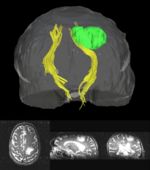 Clustered fibers in the region of the corticospinal tract have been used to identify regions of interest for slice-by-slice measurements of this tract's diffusion properties in normals and in tumor subjects. A pilot study (with Monica Lemmond at Harvard Medical School and Stephen Whalen and Alexandra Golby at Brigham and Women's Hospital/HMS) has demonstrated changes in tumor-affected tracts (relative to the contralateral unaffected side) beyond the apparent tumor border. A larger study is currently underway. 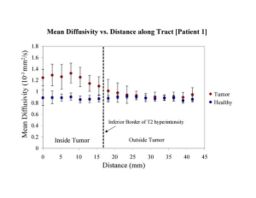 Mean diffusivity along tract affected by tumor and contralateral unaffected tract. Axial level of tumor border on T2 is marked with dashed line. 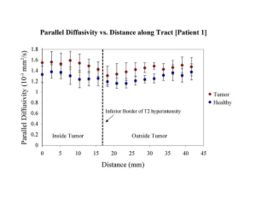 Parallel diffusivity (major eigenvalue) along tract affected by tumor and contralateral. Axial level of tumor border on T2 is marked with dashed line. 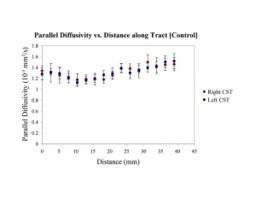 Atlas creation and automatic labeling has been performed in high-quality DTI datasets from Susumu Mori. Images showing example segmentation results are below. Work is underway to apply this atlas to segment additional datasets to define regions of interest that may be used in the study of schizophrenia. 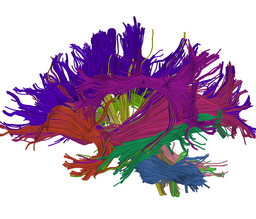 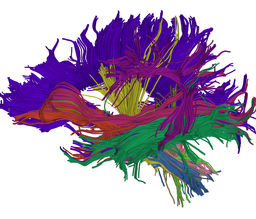 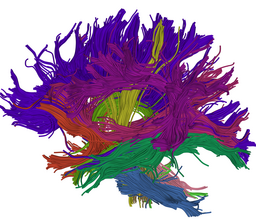 Subdivisions of the corpus callosum, labeled using the cluster atlas in 3 subjects. 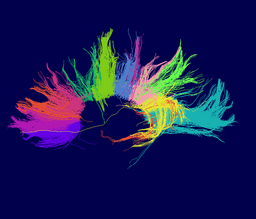 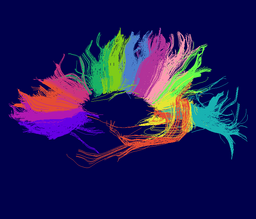 The software employed in this process includes:

All of the code is part of NA-MIC. The VTK classes are in the 3D Slicer DTMRI module, while the ITK class is currently located in the NA-MIC Sandbox and will be included in ITK in the future.