In this work, we study the benefits of Random Forest classifiers and the associated Gini importance measure for selecting voxel subsets that form a multivariate neural response in a fMRI experiment. The Gini importance measure quantifies the predictive power of a particular feature when considered as part of the entire pattern. The measure is based on a random sampling of fMRI time points and voxels. As a consequence the resulting voxel score, or Gini contrast, is highly reproducible and reliably includes all informative features. The method does not rely on a priori assumptions about the signal distribution, a specific statistical or functional model or regularization. Instead it uses the predictive power of features to characterize their relevance for encoding task information. The Gini contrast offers an additional advantage of directly quantifying the task-relevant information in a multi-class setting, rather than reducing the problem to several binary classification sub-problems. In a multi-category visual fMRI study, the proposed method identified informative regions not detected by the univariate criteria, such as the t-test or the F-test. Including these additional regions in the feature set improves the accuracy of multi-category classification. Moreover, we demonstrate higher classification accuracy and stability of the detected spatial patterns across runs than the traditional methods such as the recursive feature elimination used in conjunction with Support Vector Machines.

Fig.1 Scheme of the algorithm

In our experiments, we observed that Gini contrast as a voxel selection score identifies regions detected by univariate criteria and additional informative regions consistently missed by univariate criteria. Regions selected by the Gini contrast measure exhibit substantial overlap for different fMRI data trials for the same subject and across subjects. 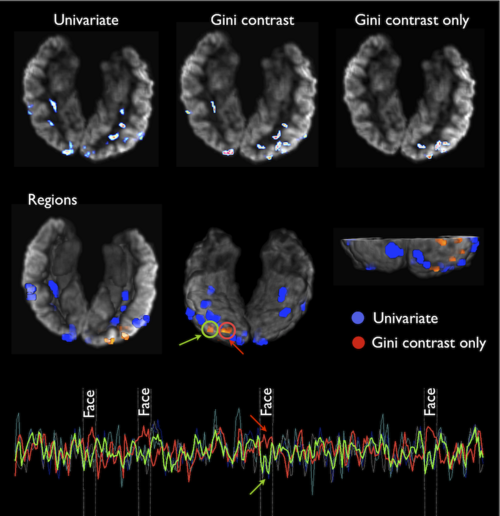