We propose a unified framework for computing atlases from manually labeled data sets at various degrees of “sharpness” and the joint registration and segmentation of a new brain with these atlases. In non-rigid registration, the tradeoff between warp regularization and image fidelity is typically set empirically. In segmentation, this leads to a probabilistic atlas of arbitrary “sharpness”: weak regularization results in well-aligned training images, producing a “sharp” atlas; strong regularization yields a “blurry” atlas. We study the effects of this tradeoff in the context of cortical surface parcellation, but the framework applies to volume registration as well. This is an important question because of the increasingly availability of atlases in public databases and the development of registration algorithms separate from the atlas construction process.

In image registration, one usually optimizes the objective function with two parts. The first term is the similarity between images. The second term regularizes the warp. The smoothness parameter that weights the second term determines the tradeoff between the similarity measure and the regularization. In Atlas-based segmentation, one is given a set of labeled training images. The training images are co-registered to a common space. An atlas that summarizes the information between the image features and the labels is computed in this common space. This atlas is used to segment and normalize a new image.

We employ a generative model for the joint registration and segmentation of images (see figures below). The atlas construction process arises naturally as estimation of the model parameters. This framework allows the computation of unbiased atlases from manually labeled data at various degrees of "sharpness", as well as the joint registration and segmentation of a novel brain in a consistent manner.

We use the generative model to compute atlases from manually labeled data at various degrees of “sharpness” and the joint registration-segmentation of a new brain with these atlases. Using this framework, we investigate the tradeoff between warp regularization and image ﬁdelity, i.e. the smoothness of the new subject warp and the sharpness of the atlas. We compare three special cases of our framework, namely:

(1) Progressive registration of a new brain to increasingly “sharp” atlases using increasingly flexible warps, by initializing each registration stage with the optimal warps from a “blurrier” atlas. We call this multiple atlases, multiple warp scales (MAMS).

We use dice as the measure of segmentation quality. From the graph below, we note that the optimal algorithms correspond to a unique balance between atlas “sharpness” and warp regularization. Our experiments show that the optimal parameter values that correspond to this balance can be determined using cross-validation. The optimal parameter values are robust across subjects, and the same for both co-registration of the training data and registration of a new subject. This suggests that a single atlas at an optimal sharpness is sufficient to achieve the best segmentation results. Furthermore, our experiments also suggest that segmentation accuracy is tolerant up to a small mismatch between atlas sharpness and warp smoothness. 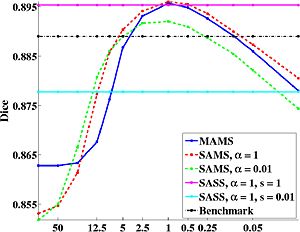 Plot of Dice as a function of the warp smoothness S. Note that S is on a log scale. [math]\alpha[/math] corresponds to the sharpness of the atlas used.