Atrial fibrillation, a cardiac arrhythmia characterized by unsynchronized electrical activity in the atrial chambers of the heart, is a rapidly growing problem in modern societies. Electrical cardioversion and antiarrhythmic drugs are used to manage this condition, but suffer from low success rates and involve major side effects. In an alternative treatment, known as catheter ablation, specific parts of the left atrium are targeted for radio frequency ablation using an intracardiac catheter. Application of radio frequency energy to the cardiac tissue causes thermal injury (lesions), which in turn results into scar tissue. Successful ablation can eliminate, or isolate, the problematic sources of electrical activity and effectively cure atrial fibrillation.

Magnetic resonance imaging (MRI) has been used for both pre- and and post-ablation assessment of the atrial wall. MRI can aid in selecting the right candidate for the ablation procedure and assessing post-ablation scar formations. Image processing techniques can be used for automatic segmentation of the atrial wall, which facilitates an accurate statistical assessment of the region. As a first step towards the general solution to the computer-assisted segmentation of the left atrial wall, in this research we propose a shape-based image segmentation framework to segment the endocardial wall of the left atrium.

A powerful approach in medical image segmentation is active contour modeling wherein the boundaries of an object of interest are captured by minimizing an energy functional. The segmentation of the endocardial wall of the left atrium in delayed-enhancement magnetic resonance images (DE-MRI) using active contours is a challenging problem mainly due to the absence of clear boundaries. This usually leads either to contour leaks, where the contour expands beyond the desired boundary, or partial segmentation, where the contour only captures the desired area partially. A shape-based segmentation approach can overcome this problem by using prior shape knowledge in the segmentation process. In this research, we use shape learning and shape-based image segmentation to identify the endocardial wall of the left atrium in the delayed-enhancement magnetic resonance images.

We extract the left atrium endocardium region (blood pool) from the DEMRI image using a multi-atlas based scheme. TODO add more detail and tutorial of using the module.

With the endocardiac region having been segmented, we further extract the LA muscle wall by using the coupled surface evolution technique. This algorithm is now implemented as a Slicer module.

The module can be installed from the extension manager: 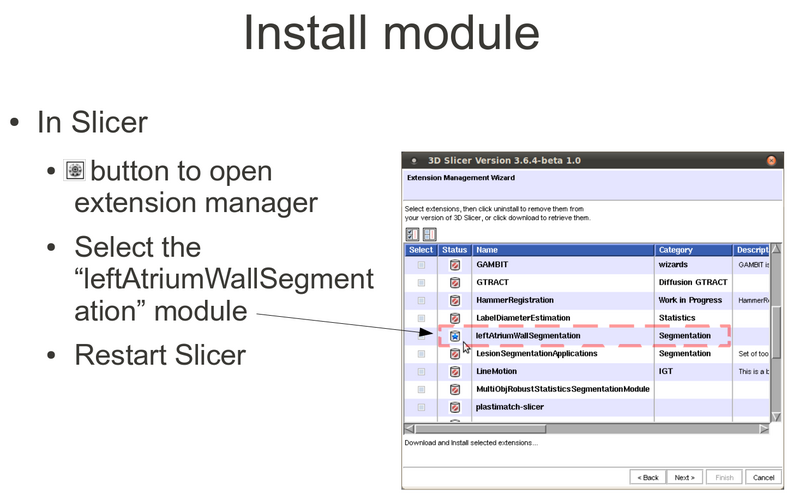 After that, the module can be found in the Segmentation module category. Its usage is shown below: 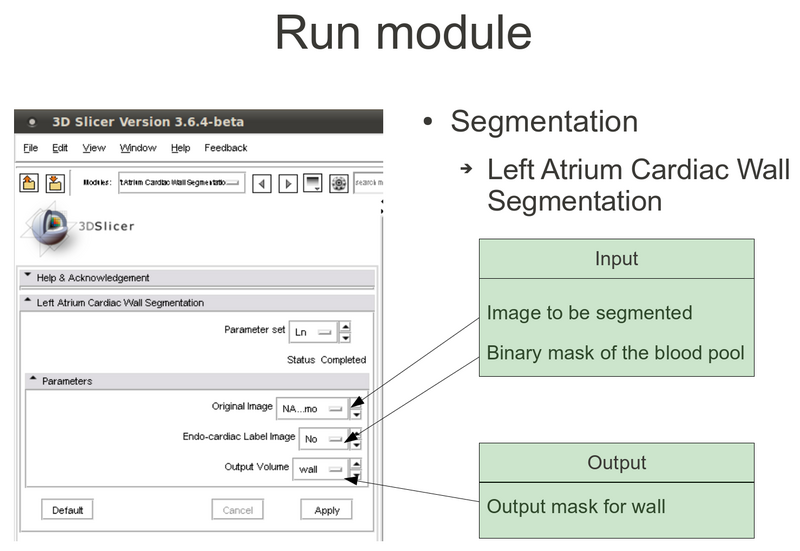 One of the results is shown below: 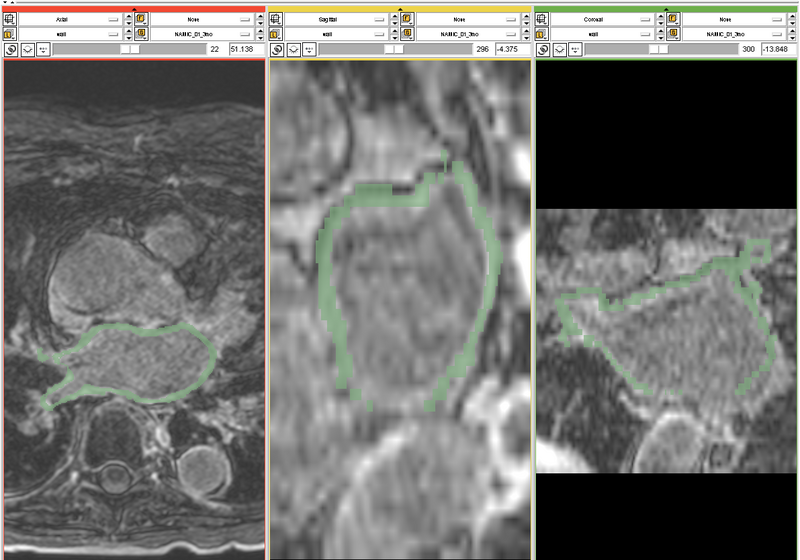 The two teams from Georgia Tech and University of Utah held a teleconference on November 10, 2010. The Georgia Tech team requested 3-month pre-ablation, immediately-after-ablation, and 3-month post-ablation DE-MRI, their corresponding hand segmentation of the left atrial wall, and the blood pool MRA as well as the outcome of the ablation procedure for the DE-MRI's provided. The specific information of interest with regards to the procedure outcome involves recurrence of the atrial fibrillation (yes/no), the time of recurrence after the procedure (x number of months), and any other relevant clinical data which its prediction could assist the physician before the ablation procedure (e.g., the severity of recurrence, etc.). The Utah team agreed to provide the data in a week. The two teams agreed to exchange their latest works/publications regarding the atrial fibrillation project.

The Georgia Tech team proposed using machine learning techniques to predict the success of the ablation procedure and time of recurrence (among other information of interest for the physician) based on enhancements in the left atrial wall in pre-ablation, and immediately-after-procedure DE-MRI's. The feasibility of using pre-ablation DE-MRI for procedure success in already published by the Utah team.