Bi-orthogonal spherical wavelets have been shown to be powerful tools in the segmentation and shape analysis of 2D closed surfaces, but unfortunately they suffer from aliasing problems and are therefore not invariant under rotations of the underlying surface parameterization. See the toy example in the figure below. 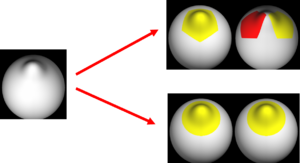 The two images on the left of the figure below show the cortical folding speed detected by the bi-orthogonal wavelets. Notice, how the detection changes wildly with different parameterizations. On the other hand, the results of over-complete wavelets are stable across different parameterizations. Furthermore, the over-complete wavelets are much more sensitive than the bi-orthogonal wavelets in detecting changes.

As seen in the figure below, we find that larger folds (lower wavelet scales) develop earlier but slower. This is consistent with the previous postmortem study[3]. Furthermore, we find that the fastest folding development occurs at a younger age on the left hemisphere than on the right.

The figure below shows the results of the regional analysis. Consistent with the global development result discussed above, regions that develop earlier (darker blue) also grow more slowly (more red). For example, the lateral side of the parietal lobe on the left hemisphere develops earlier than the right hemisphere, but at a slower speed.