The University of Iowa tractography program GTRACT is based on a modified streamlines algorithm. The advantage of this algorithm is that it helps to resolve fibers in regions where there are crossing or fanning fibers. We have also instrumented a fast marching based algorithm into GTRACT that we are currently evaluating. These algorithms require a seed region as input and will generate a VTK file representing the fiber tracts. Data associated with anisotropy, curvature or cost of the tract can be included as point data associated with the fiber tract. Tools are also available for computing the distance between fiber tracts.

These algorithms find the optimal path (i.e. "the anchor tract") connecting two ROIs, which is equivalent to finding a geodesic on a manifold (which may be any Finsler manifold, such as the Riemannian manifold). Then, the associated fiber bundles is segmented from the data via a region-based flow adapted for DW-MRI direction-dependent data.

Note, I've put this together which may have some educational and/or thought provoking value. It is certainly biased towards the ideas entertained at Georgia Tech over the past few years and could be greatly extended/enhanced with more input from others in the community. Check it out here: DW-MRI Musings.

Stochastic Tractography is a Bayesian approach to estimating nerve fiber tracts from DWMRI (Diffusion Weighted Magnetic Imaging) images. The Bayesian framework provides a measure of confidence regarding the estimated tracts. This measure of confidence allows the algorithm to generate tracts which pass through regions with uncertain fiber directions, revealing more details about structural connectivity than non-Bayesian tractography algorithm.

This is a PDE-based approach to white matter connectivity from DTI that is founded on the principal of minimal paths through the tensor volume. Our method computes a volumetric representation of a white matter tract given two endpoint regions. We have also developed statistical methods for quantifying the full tensor data along these pathways, which should be useful in clinical studies using DT-MRI. 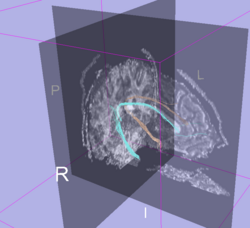 The DT-MRI module of Slicer uses a streamline tractography algorithm with a mutilple-ROI approach (AND and NOT operators).

The single-subject clustering uses trajectory similarity to create bundles. The atlas clustering identifies bundles that have been learned from a group DTI dataset.

The goal of the POIStats (Path-of-Interest Statistics) algorithm is to calculate the highest probability path between two user-defined seed regions from DTI. The best path is determined by minimizing the energy of the entire path through randomization of the position of the control points of a spline curve drawn through the data and of the position of the endpoints.