The aim of this project to provide a computationaly efficient non-rigid/elastic image registration algorithm based on the Optimal Mass Transport theory. We use the Monge-Kantorovich formulation of the Optimal Mass Transport problem and implement the solution proposed by Haker et al. using multi-resolution and multigrid techniques to speed up the convergence. We also leverage the computation power of general purpose graphics processing units available on standard desktop computing machines to exploit the inherent parallelism in our algorithm.

The Optimal Mass Transport problem was first formulated by a Frech engineer Gasper Monge in 1781, and was given a modern formulation in the work of Kantorovich and, therefore, is now known as the Monge-Kantorovich problem. We extend the work by Haker et al. who compute the optimal warp from a first order partial differential equation, an improvement over earlier proposed higher order methods and those based on linear programming. We implement the algorithm using a coarse-to-fine strategy resulting in phenomenol improvement in convergence. The algorithm also involves inverting the Laplacian in each iteration, which we perform using multigrid methods for even faster per iteration computation times. This method has a number of distinguishing characteristics:

The flowchart of the algorithm is shown in the following figure. 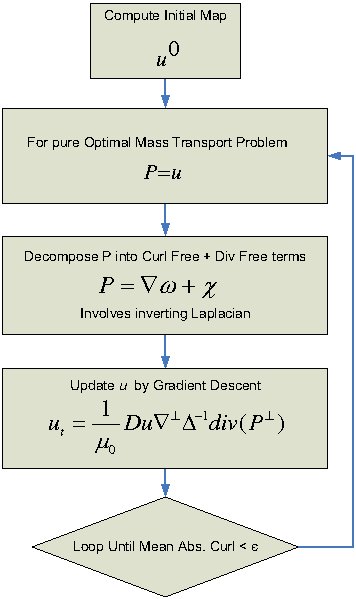 Performing image registration using a multi-resolution approach is widely used to improve speed, accuracy and robustness. Registration is first performed at a coarse scale. The spatial mapping determined at coarse scale is then used to initialize registration at the next finer scale. This process is repeated until it reaches the finest scale. Our coarse-to-fine hierarchy comprises of three levels and we use bi-cubic interpolation to interpolate results from coarse to fine grid. This process is depicted in the following figure.

The following figure shows the outline of processing for the OMT solver conducted on the GPU. Processing occurs in two major phases: evolution of the map from source to target volumes and time step adjustment. Each gray rectangle represents one Cg kernel executed on the GPU. Arrows indicate the flow of data volumes through the Cg kernels. The entire process in the figure, above is repeated left to right until convergence.

The algorithm was tested on a synthetic 3D dataset comprising of a sphere and deformed version of it. The deformation vector field for this experiment are shown below:

Below we show the results from registration of two 3D brain MRI datasets. The first data set was pre-operative while the second data set was acquired during surgery (craniotomy). Both were resampled to 256*256*256 for uniform voxel size and the skull was removed. We show the results on an axial and a coronal slice of the 3D brain volumes. The sag and compression areas can easily be seen in the deformed grid shown below. The reults shown are after 3600 iterations, requiring less than 15 minutes of computation time (Dual Xeon 1.6GHz + nVidia GeForce 8800 GX GPU. The optimal computation time was found to occur for a grid size of 128*128*128 where about 1000 iterations execute in less than 15 seconds. This is due to the memory limitations on the graphics card used. The results on an axial and coronal slice are shown below: