This page provides a summary of Slicer's role in the NA-MIC Toolkit. To learn more about Slicer or to download Slicer, click here to visit the Slicer Website. 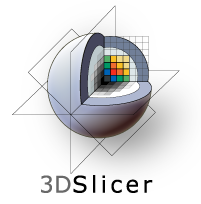 Slicer is a "point and click" end-user application. Slicer is used as a vehicle for delivering algorithms to computer scientists, biomedical researchers and clinical investigators. Slicer is distributed under an open source license without a reciprocity requirement and without restrictions on use. For a sampling of the portfolio of applications, please see the Slicer Gallery page. To get a list of the key features of slicer, please visit this page.

Slicer 4.1 is a general purpose biomedical computing application with extensive built-in visualization and analysis capabilities, accessible through an easy to use graphical interface. For advanced users, Slicer may be extended at run-time with user-defined plug-in modules.

Visit the Slicer training page to find tutorials for Slicer.

The 3D Slicer (or simply Slicer) software was initially developed as a joint effort between the Surgical Planning Lab at Brigham and Women's Hospital and at the MIT AI Lab. The program has been extensively refactored by Kitware and Isomics under the direction of Ron Kikinis, and it has evolved into a national plattform, supported by a variety of federal funding sources. This versatile research environment has resulted in a wide array of functionality, supporting a variety of medical imaging projects.

Slicer is expected to evolve dynamically in architecture and implementation by drawing on the expertise and effort of a core engineering team as well as the wider NA-MIC, NAC, Harvard Catalyst and NCIGT communities. The NA-MIC software engineering methodology, as applied to the problems which Slicer has historically addressed, is expected to result in a cleaner architecture that is easier for developers to support and extend.

Major funding for Slicer was provided through a variety of federal and private funding sources, including NCRR, NIBIB, Roadmap, NCI, NSF, DOD and others.

Questions about running Slicer can be sent to the Slicer User's Mailing List. Archives of slicer-users and subscription management tools are available at:

Slicer compilation/development questions can be sent to the Slicer Developer's Mailing List. Archives of slicer-devel and subscription management tools are available at: