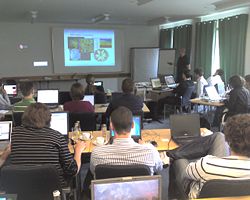 Annnouncement of Winners for the Jan 2009 Contest

CONGRATULATIONS TO Winning contestants from each category who get the cash prizes courtesy of Kitware Inc.

Slicer3 is now being used to perform meaningful research tasks. As part of the NA-MIC Training Core activities we are building a curated portfolio of tutorials for the basic functions and functionality available in Slicer. Examples for such existing tutorials are the level 1 and 2 courses in the training compendium.

Next round: Tutorial Contest June 2009

The primary purpose of this contest is to enrich the training materials that are available to end-users and developers using 3D Slicer and the NA-MIC kit. We believe contestants will be motivated to participate to enhance the dissemination of their own algorithms that they have incorporated into the Slicer3 platform and/or to enhance training of Slicer3 functionality for their own laboratory groups.
There will be two categories:

A basic template has been used for all of the tutorials. The same design should be used for the contest. It can be found here: Template

NOTE THESE TUTORIALS ARE STILL UNDER DEVELOPMENT: Final versions will be posted on the Slicer 3 101 page with the rest of the training compendium