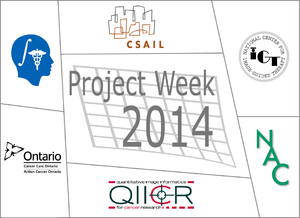 Welcome to the web page for the 19th Project Week!

A summary of all past Project Events.

Active preparation begins 6-8 weeks prior to the meeting, when a kick-off teleconference is hosted by the NA-MIC Engineering, Dissemination, and Leadership teams, the primary hosts of this event. Invitations to this call are sent to all NA-MIC members, past attendees of the event, as well as any parties who have expressed an interest in working with NA-MIC. The main goal of the kick-off call is to get an idea of which groups/projects will be active at the upcoming event, and to ensure that there is sufficient NA-MIC coverage for all. Subsequent teleconferences allow the hosts to finalize the project teams, consolidate any common components, and identify topics that should be discussed in breakout sessions. In the final days leading upto the meeting, all project teams are asked to fill in a template page on this wiki that describes the objectives and plan of their projects.

Do not add your name to this list - it is maintained by the organizers based on your paid registration. (Please click here to register.)